COLEEN NOLAN has announced she is stepping away from Loose Women due to online bullying in the wake of the Kim Woodburn controversy.

The presenter has also put all other commitments on hold, including her upcoming solo tour.

In a statement this evening, Nolan’s representatives said that she is currently ‘not strong enough to withstand this constant and unfounded online abuse’.

Ofcom has received more than 3,000 complaints over the treatment of Woodburn when she appeared as a guest on Loose Women recently.

Nolan and Woodburn have been involved in a bitter feud since appearing on Celebrity Big Brother in 2017.

Appearing on This Morning on Tuesday, Nolan revealed trolls had told her to ‘die like your sister’ Bernie.

In a statement this evening, Nolan’s representatives described the abuse as ‘heartbreaking’.

“Following the constant online bullying, trolling, and misrepresentation of her words, actions and re-actions, it is with sad regret that Coleen is taking an immediate hiatus from all her current commitments including Loose Women and postponing her Never Too Late solo concert tour,” read the statement.

“Coleen has spent 50 years in show business and 18 years as one of the most loved members of the Loose Women panel, and has never been subjected to such a horrifying torrent of online abuse or such a heartbreaking attack on her reputation. 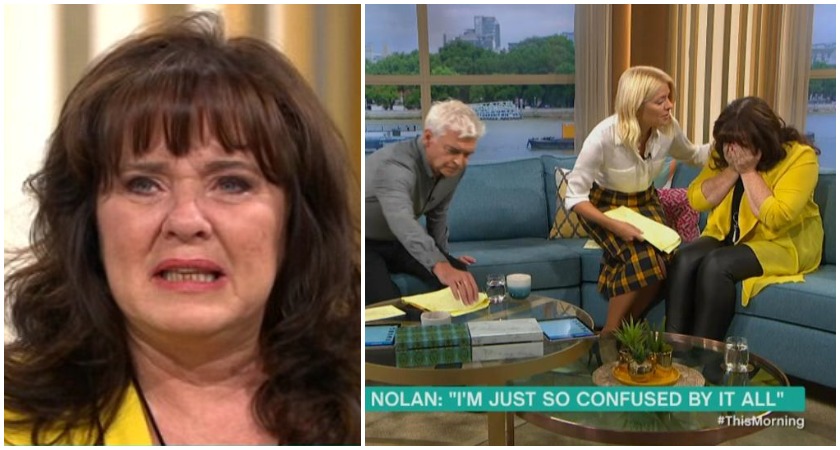 “Coleen is devastated to let her supporters and fans down, but is simply not strong enough to withstand this sort of constant and unfounded abuse, so she will be taking time out and spending it with her children and family where she feels loved and respected.

“She sends her love to everyone who has supported her and knows who she really is and plans to return when she feels stronger.”

However many people on social media sided with Woodburn. An online petition calling for Nolan to be removed from the show’s panel ‘for her atrocious act of unprovoked bullying’ has amassed more than 25,000 signatures.