A FAMOUS MURAL in Co. Cork has had to be painted over because it was violating the new law which bans alcohol advertising within 200m of schools and playgrounds.

The iconic artwork, on the side of a house in the town of Macroom, featured a pint of Murphy's looming above crumbling brickwork, with a white cat sitting in the window.

It was deemed to be too close to a couple of schools in the area, and thus the Murphy's element of the painting had to be blotted out, by law. 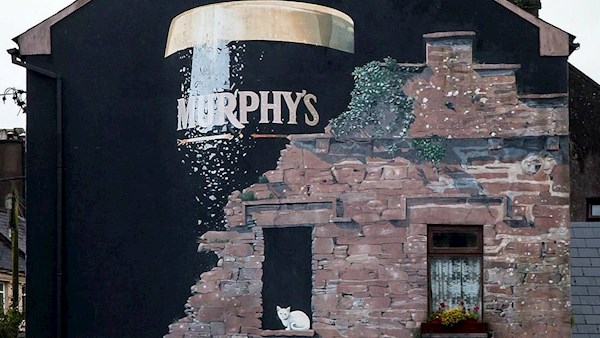 The legislation, which came into effect at midnight last night, also bans outdoor alcohol advertising on things like public transport and in cinemas.

Heineken, who own Murphy's Irish Stout, confirmed that after inspecting the site in the context of the new legislation, their hands were tied.

"This site is within 200m of a school and we had no other choice but to remove it," said a Heineken spokesperson.

Failure to remove the image would've exposed Heineken to hefty fines or even prison sentences for those responsible.

The mural was painted in 1999, by two well-known local artists, Denis O’Reardon and Cormac Shiel, following an arrangement between the Flynn family, who own the house, and brewing company Murphy’s.

It was maintained by Heineken after it took over the brewery.

Local councillor Martin Coughlan admitted that it was a shame that the iconic mural had to be removed.

"Anyone travelling from the Killarney side would see it on their way over the bridge. Only the other day I saw busloads of tourists running back from the square to take pictures," he said.

"It has been a landmark. It’s just unfortunate that it had to go."

James Flynn, who lives in the house, described it as 'the end of an era'.

"Unfortunately there is nothing we can do," he said.