THE DUBLIN Society for Prevention of Cruelty to Animals (DSPCA) is appealing for helping in identifying a man who was filmed shoving an injured dog under the animal rescue charity’s gates.

The DSCPA posted “upsetting and unacceptable” CCTV footage of the incident on their Facebook page.

In the video, the man can be seen approaching the gates of the rescue charity before he begins forcibly pushing the injured and evidently distressed animal under the gates with no care for its safety.

"This is footage from our shelter gates, taken yesterday evening. This is upsetting and not acceptable," the Facebook post reads.

"We are asking the public if they recognise the individual in the video or have any information that would help our inquiry.

"The person who dumped her made no effort to contact us by ringing the buzzer on the gate."

The DSPCa has said that the dog, a 1-2-year-old terrier cross, suffered multiple pelvis fractures.

They also noted as nerve damage and bruising, adding "the manner in which she was pushed under the gate must have been excruciating for her."

Thankfully the dog, who has been named Peach by those looking after her, is on the mend after being taken to a local vet.

Gillian Bird, a spokesperson for the charity has appealed for anyone who may have information relating to the incident to contact the DSPCA as soon as possible. 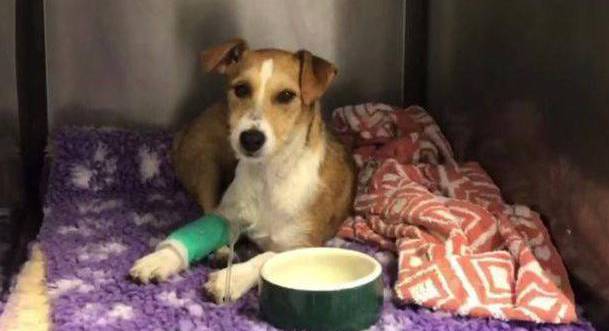 "If anybody thinks they have any information, we really would like to talk to this person, we'd love to know what the circumstances were, and in some cases, we may actually be able to prosecute for cruelty."