16/4/2013. Picture shows An Garda Siochana carrying out an EU Coordinated Counter Terrorism Exercise. Todays exercise provide the media with an opportunity to witness the challenges faced by law enforcement agencies in responding to terrorist attacks. The irish exercise took place in Dublin the ESB , Generating Station, Pigeon House Road Dublin 4 which include police agencies from three other european jurisdictions.The operation is a simulated hostage rescue exercise, during the rescue attempt there will be coordinated operation involving sea based, land based and air borne elements.You are not to identify individual police person in the exercise. Photo:Leon Farrell/ Photocall Ireland.

AN IRISH security expert has warned that Ireland is not immune from a terrorist attack and is the weakest link in European security.

Tom Clonan, a security analyst based in Ireland, made the comments on Newstalk Breakfast this morning, June 5.

"We really do need to have an open, calm and mature discussion about our security," he said. "We're very different to every other European Union state because we don't have a proper security infrastructure.

"We're Europe's weakest link when it comes to counter-terrorism, policing, and emergency response. 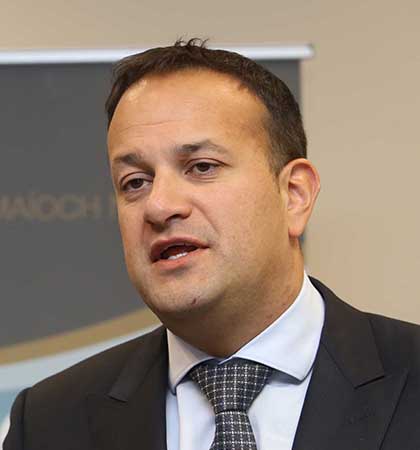 Ireland's incoming Taoiseach has pledged to form a COBRA style committee in his first 50 days of taking office. (Picture:Sam Boal/RollingNews.ie)

"Irish citizens are the least well-informed citizens throughout the European Union in terms of what the terror threat is and what to do in the event of a marauding attack such as the one in London last weekend," Mr Clonan said.

"This time last year I would have said that an attack in Ireland like Westminster or Manchester was, in theory, possible but highly unlikely," he said.

"But I think after the Stockholm attack with Sweden being a neutral country with low threat possibilities, Ireland needs to face up to the fact that an attack here is not just a theoretical possibility but a distinct possibility.

"Irish people can no longer regard themselves as immune to this unfortunate dynamic which is emerging," he added.

Mr Clonan's comments follow Ireland's Taoiseach-elect Leo Varadkar pledged to set up a high-powered COBRA-style committee within his first 50 days of taking office to deal with any attack in Ireland.

"Leo Varadkar's announcement is to be welcomed, because one of the criticisms felt within the defence and security industry here is that previous ministers for justice and taoisigh, didn't often have time to be in the same room as the chief of staff or the commissioner to talk about threats," Mr Clonan said.

"Very often it was just general secretaries and senior civil servants that sat down and it was more of a policy making group rather than a workshop for walking us through what we would do in the event of an attack like Westminster or London Bridge," he added.

Have your say: Share your thoughts on this story in our comments section below or on our Facebook page.