AWARD-winning actor Andrew Scott joined a 40-strong group of Irish Londoners in the capital last night, to back Ireland’s campaign for marriage equality.

The Dublin native – who has starred in BBC series Sherlock – attended the gathering at the Jubilee Gardens in Belvedere Road, close to the London Eye, to pledge his support for the ‘Yes Vote’ ahead of Friday’s same-sex marriage referendum.

The meeting was set up to allow London-based Irish people who are unable to vote in Friday’s referendum to encourage their friends and family back home to have their say. 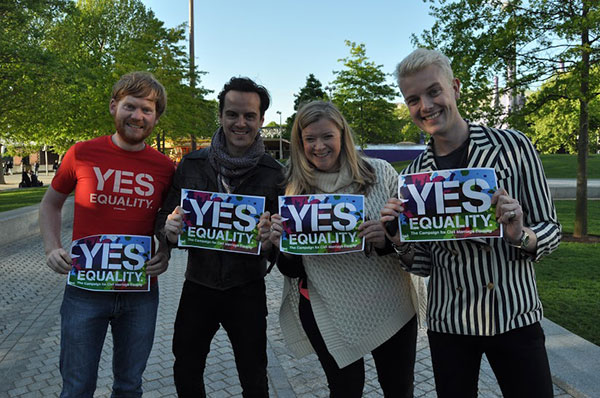 Cork-native Catherine O’Leary, 25, who works as a speech and language therapist for the NHS in London, and organised the event, praised “the abundance of goodwill amongst those who gathered.”

Speaking to The Irish Post, she said: “It was heartening to see people engaged and willing to come along at short notice to support the YesEquality and #BeMyYes campaigns.