AN IRISH AMERICAN pro-surfer was bitten by a shark just off the coast of Florida over the weekend, but rather than getting himself checked out at the hospital, he headed instead to a bar for a few drinks.

Frank O’Rourke was surfing on a beach in Jacksonville on Saturday afternoon when the incident occurred.

Speaking to ABC News, O’Rourke said: “[The] shark comes out of the water and grabs onto my arm, right by my elbow. Kinda tugs a little bit and thrashes.

"Wow what a weekend. I’m thankful to come away with minor injuries from a shark that bit me Saturday!” He wrote.

After the attack, O’Rourke was treated by lifeguards, but decided against a visit to the hospital and went for a few beers instead.

His friend RJ Berger, who was in the water with O’Rourke and saw the attack unfold, told News4Jax: “He was right there behind the wave and boom - that’s when he got hit and you can see the shark’s tail splashing. It like, knocked him off his board.

“It was kind of panic, like, ‘Did that just happen?’ 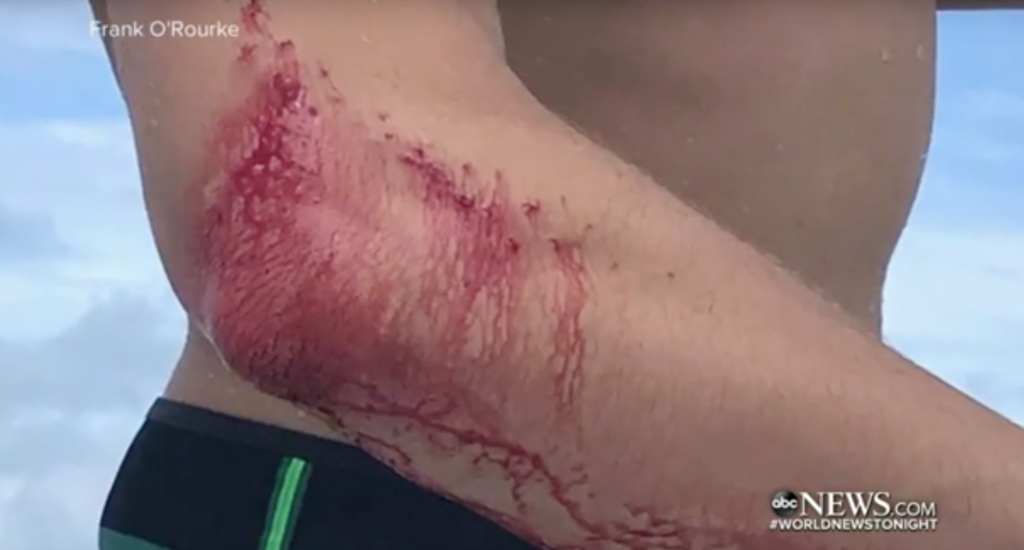 The state of O'Rourke's arm following the attack

“It kind of took him a couple of seconds to, like, gather himself and realise, like, ‘Wow, I just bit by a shark’, and then we all went into the beach.

“He immediately went to a bar ‘cause he was like, ‘I got bit by a shark,’ and people were like, ‘I’ll buy you drinks.’ So he went and hung out at the pier.”

In 2018, there were 32 unprovoked shark attacks recorded. Half of those attacks occurred off the coast of Florida.