Anna Burns received her trophy from the Duchess of Cornwall after winning the Man Booker Prize (Image: Getty)

IRISH author Anna Burns has won the 2018 Man Booker Prize with her third full-length novel, Milkman, which is set in Northern Ireland during the Troubles.

Burns was not among the favourites before the win, with four of the other five shortlisted authors ahead of her in the betting.

However she becomes the 17th woman to win the award and the first writer from Northern Ireland to win.

The judges came to a unanimous decision, saying Burns’ novel was unlike anything they had experienced.

'A story of brutality and resistance'

“None of us has ever read anything like this before,” said Kwame Anthony Appiah, 2018 Chair of judges.

“It is a story of brutality, sexual encroachment and resistance threaded with mordant humour.

“Set in a society divided against itself, Milkman explores the insidious forms oppression can take in everyday life.” 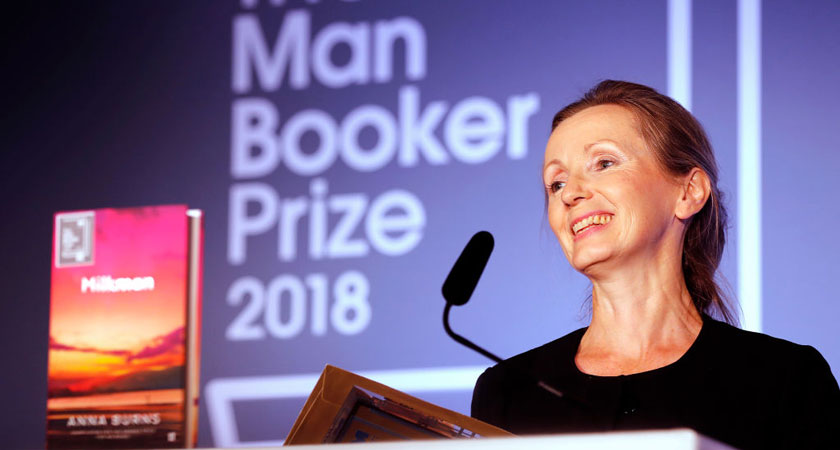 Burns was born in Belfast in 1962 and grew up in the Ardoyne area, a working-class Catholic district in the north of the city.

She moved to London in 1987 and currently lives in East Sussex, England.

Milkman concerns a bookish young woman growing up in a city rife with factions who is pressurised by an older, more powerful man with an unsettling sexual interest in her, and tormented by the vicious tongues of her neighbours.

“Burns draws on the experience of Northern Ireland during the Troubles to portray a world that allows individuals to abuse the power granted by a community to those who resist the state on their behalf,” commented the judges on the winner.

“Yet this is never a novel about just one place or time. The local is in service to an exploration of the universal experience of societies in crisis.”

Burns, 56, was presented with a trophy from HRH The Duchess of Cornwall and a £50,000 cheque at London’s Guildhall on Tuesday.

She will also receive a designer bound edition of her book and a further £2,500 for being shortlisted, while Royal Mail is issuing a congratulatory postmark for six days from tomorrow.

Last year’s winner, Lincoln in the Bardo by George Saunders, saw sales increase by 1,227 per cent in the week after winning.