AN IRISH elderly couple who have been completing marathons together for that last thirty years have decided to finally hang up their running shoes at the age of 80.

The heartwarming image of Kay and Joe O'Regan holding hands as they crossed the line for the last time at the Cork marathon in June went viral on Twitter, thirty years after they reached the finish of the London marathon together for the first time in 1986, aged 49.

"We ran our first one together and we ran our last one together, that was the plan, if it is our last one, we'll see," said Joe speaking to the Irish Post, suggesting the octogenarians may not be fully committed to retiring, just yet.

Since the 1980s, Kay and Joe have traveled together to every capital city in Europe which hosts marathons, Kay alone has clocked up 113 in the last three decades.

"We both love running, but I wasn't a lover of the long-distance running. We used to book our holidays around marathons. Prague, Berlin, places like that," said Joe. 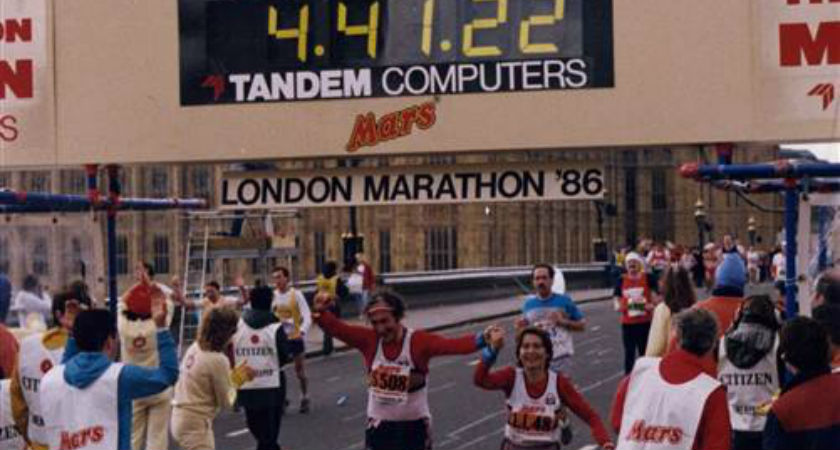 Kay and Joe O'Regan cross the finish line at the London marathon in 1986. (Kay O'Regan)

Both Kay and Joe emigrated from Ireland to London in the 1950s, first meeting at Victoria station while both were working on the buses for London Transport.

"Kay went to London to do nursing in the 50s. I went across for a six month holiday and I was supposed to come back, my Dad had a business. I took a job on the buses out of Cricklewood garage," said Joe.

"At that time they had conductors on all the buses. I would say nearly eighty percent of people working on the buses at that time were young Irish people in the 50s."

"I was in Cricklewoood and Kay was in Willesden. Kay used to work on the 52 bus which went from Borehamwood to Victoria, terminating there."

Joe's bus, the number 16, also terminated in Victoria and their relationship blossomed as they got to know each other while waiting to clock out at the end of each shift in Victoria station.

Joe would return to Ireland, but he only lasted six months at the family business in Galway. After he returned, the couple married two years later settling in Cricklewood in North London.

After a number of years in different locations around North London, they moved to Ashford in Middlesex with their two children. Kay was working in public relations for the probation service while Joe had a job at Firestone Tyres.

The couple only took up running aged 49 and joined local club Runnymeade Runners which developed the long-held appetite for running marathons.

After 41 years in Britain, Kay and Joe returned to Wexford in Ireland in 1997, where Kay was brought up, settling on Enniscorthy where they still live to this day.

Although their marathon days might now finally be behind them, there's no suggestion of then giving up running "I'm waiting for a friend to call to head out and do five or six miles," said Joe.

Asked if he would ever reconsider the decision to retire from doing marathons, Joe is philosophical.

"I don't like planning too much ahead, I don't even buy green bananas."