AN IRISH STUDIES LECTUTRER at the University of Southern Maine has insisted that the Great Famine should be taught in US schools in the same vein as teachings about The Holocaust.

Robert F. Lyons, who is of Irish descent, made the suggestion on the grounds that The Holocaust bill - which passed in his state - should be expanded to cover other historical tragedies and atrocities.

He argues that the Great Famine, which resulted in the deaths of round a million Irish men, women and children, and lead to the emigration of two million others, should included in curriculums because it covers a topic which explores, among other things, the racial hatred which many Irish immigrants received upon arrival in America in the mid-1800s. 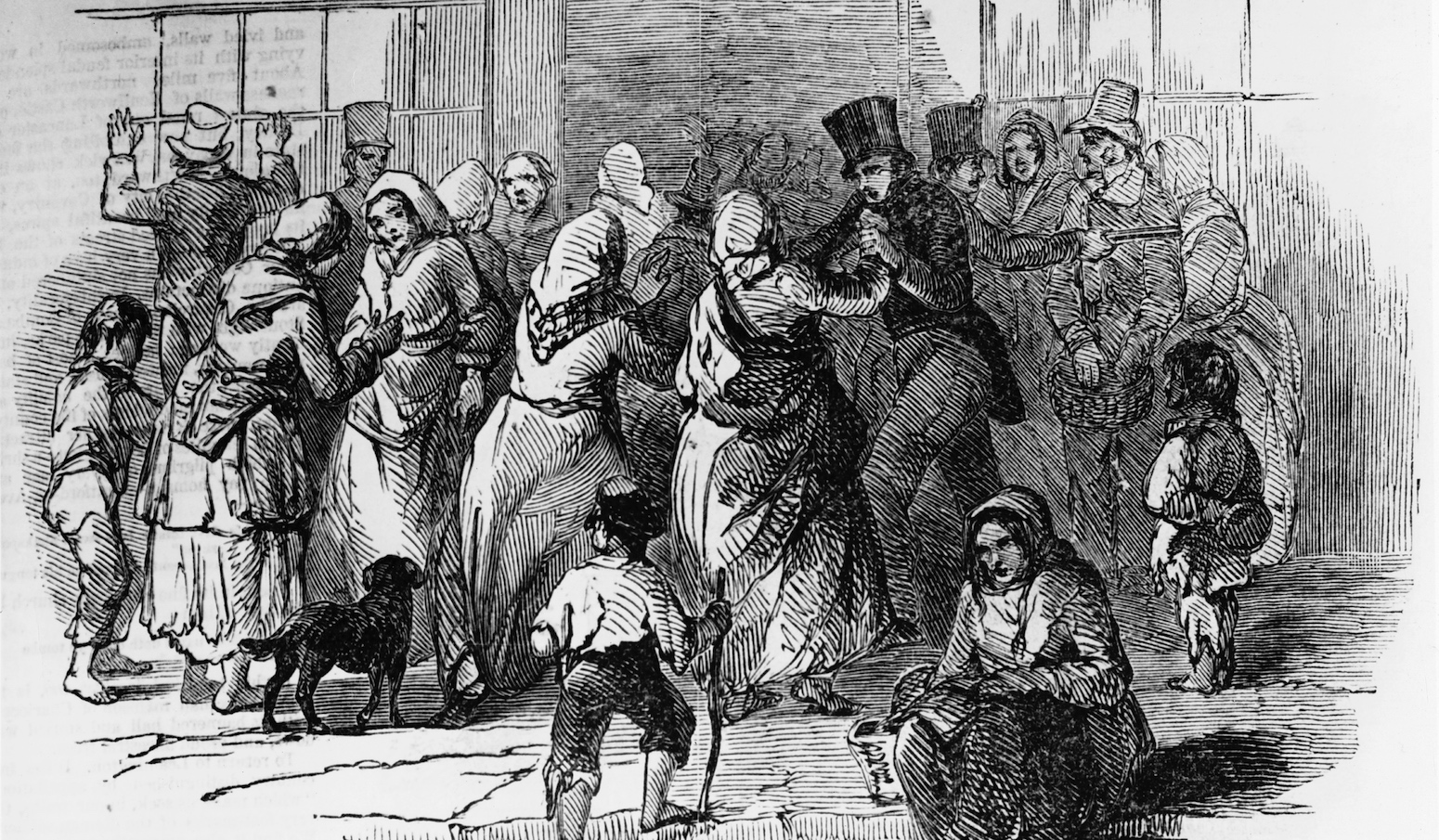 Crowds outside a government depot in Cork, Ireland, where Indian corn is being sold by the British government, 1846. Food was short after the failure of much of the potato harvest and police had to attend the sales in case of disturbances. The poor harvest was the first of the crop failures which caused the Great Famine.

"The Holocaust curriculum bill should be expanded to mandate the study of other horrific episodes of national policies which deliberately and systematically strip people of even the least semblance of basic human freedom and dignity and life itself," Lyons said.

"The teaching of the Holocaust and genocide and the Irish Famine will help our students form a conscience that affirms that our state’s ethnic, religious and cultural diversity remains one of its strengths."

Lyons says he wants his the nation to follow the example set in New York, which sees a study of the European Holocaust in the World War II period, included alongside a study of 'the mass starvation of Ireland from 1845 to 1850', as well as slavery in the Americas and the Atlantic slave trade.

"The linking of these two searing episodes in the life histories of 6 million European Jews who died as victims of Nazi persecution, and 1 million Irish who died during the Great Hunger with an estimated 2 million forced to emigrate as result of England’s 19th-century laissez-faire economic policy will always stimulate great debate and heat," he added.

"But few would argue that 'the hunger-stricken exodus of people from the island [Ireland], speaks of the odour of racial hatred surrounding the emigrant’s treatment. [It] bears more resemblance to the slave trade or the boxcars of the Holocaust than to the routine crossings of a later age,’ according to Robert Scally in 'The End of Hidden Ireland.'"