A MAN in Bristol has set up a GoFundMe page after his Irish date broke his window trying to dispose of a number two on their first date.

The unnamed – but clearly determined – Irish girl ended up upside down between the window and a wall after making a herculean effort to get rid of a poo which she’d tried to flush without success.

She had been for a meal at Nando’s with student Liam Smyth, 24, before they went back to his place to watch a Louis Theroux documentary on the all too romantic theme of Scientology.

But an unfortunate series of events unfolded after she went to the loo and blocked her date’s toilet.

In panic, she picked up her number two and threw it out the window – but it fell down into a narrow gap.

Climbing above the pane to continue her heroic disposal effort the unnamed woman got stuck and had to be rescued by firefighters.

Bristol University postgrad student Liam Smyth set up a GoFundMe page to replace the window which was broken in the process.

He wrote on the fundraising page: “About an hour into Louis Theroux and chill, my date got up to use the toilet.

"She returned with a panicked look in her eye, and told me she had something to tell me." 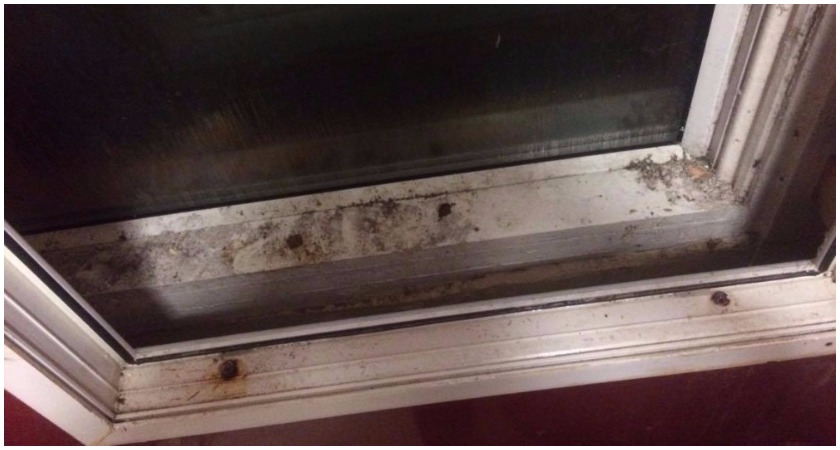 Firefighters broke the window in the process of the girl's rescue (Picture: GoFundMe)

"Unfortunately, owing to a design quirk of my house, the toilet window does not in fact open to the garden, but instead into a narrow gap of about a foot and a half, separated from the outside world by another (non-opening) double glazed window.

“It was into this twilight zone that my date had thrown her poo,” he said.

Liam explained that his date decided to fix the unfortunate situation by climbing into the window. Bad idea.

Unfortunately she couldn't reach," Smyth wrote. "She climbed further in and had the same problem.

“Eventually I agreed to give her a boost up and into the window. She climbed in head first after her own turd, reached deeper into the window, bagged it up, and passed it out, over the top and back into the toilet from whence it came.

“She called out to me to help her climb out from the window, I grabbed her waist and I pulled. But she was stuck. Stuck fast. Try as we might, we could not remove her from the window."

After 15 minutes of attempting to free her from the window, the fire brigade were called in and rescued the red-faced Irishwoman – breaking the glass in the process.

This set Liam back £300 – but his GoFundMe page has now brought in almost £2,000 since the hysterical story went viral.

A spokesperson for Avon Fire and Rescue said: “We received a call at 22:41 to one female trapped between interior and exterior glass."

“Two crews were sent from Temple station and she was rescued using hand tools.”

Liam says he will split the extra funds raised between a charity that helps build flushing toilets for the developing world and another which benefits firefighters – as his rescue workers were so kind and professional.

He added that his anonymous date, who iRadio has revealed to be an Irish student studying in the UK, is still welcome back in the Smyth household for another shot at romance.

“She’s a lovely girl – I’m not sure what’s going to happen,” Liam said.

“I’m really busy with my dissertation at the moment but I’d certainly be open to seeing her again.”

Beat that for a worst first date story!