A number of weapons including daggers, a crossbow and pistols were seized (Image: Frankfurt Police)

AN IRISH man has been arrested in Frankfurt, Germany for allegedly plotting a "serious" and "violent" attack on the city.

According to The Irish Times, local German authorities say they believe they have successfully stopped a planned "attack", after the man allegedly wrote multiple letters to authorities and the courts condemning what he described "injustices of state agencies".

The man had reportedly sent letters to multiple authorities promising there would be an "attack" on 20 July-- but authorities found and arrested the man on Thursday last, 15 July.

Officers executed a search warrant on a garden plot in the north of Frankfurt where they found a number of dangerous weapons including guns, crossbows, daggers and swords. 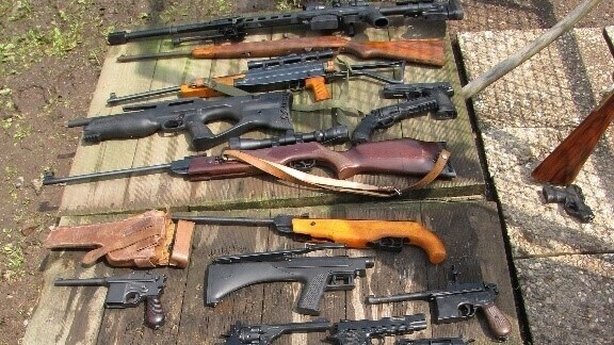 A number of weapons including daggers, a crossbow and pistols were seized (Image: Frankfurt Police)

Frankfurt police have released an image of some of the weapons discovered during the search, and in a statement said the contents of the letters ranged from confused to angry and could indicate that the man is suffering from psychological problems.

“In letters with identical contents sent to several authorities, the suspect announced the intention to carry out an unspecified attack,” a spokesperson for the Frankfurt police force reads.

The suspect, who has not been named but is understood to be a man aged 53, is being held in custody in Frankfurt on charges relating to the huge number of weapons, as well as the threats sent to various German authorities.

He is accused of "preparation of a serious violent attack of danger to the state".

A spokesperson for Ireland's Department of Foreign Affairs confirmed to RTÉ News that it is aware of the case and is providing consular assistance to affected individuals.

They said, however, that they cannot provide further details at this time as the Department does not comment on individual cases.

Investigation into the threats and seizure of weapons is continuing in Germany today.