Mona McSharry made history when for the first time in 25 years, an Irish swimmer reached the Olympic Final.

In the final – the third of her swims this week – again she posted a sub-67 second time, and came away as the 8th best swimmer in the world Summer Olympics 2020 in the 100m Breaststroke. 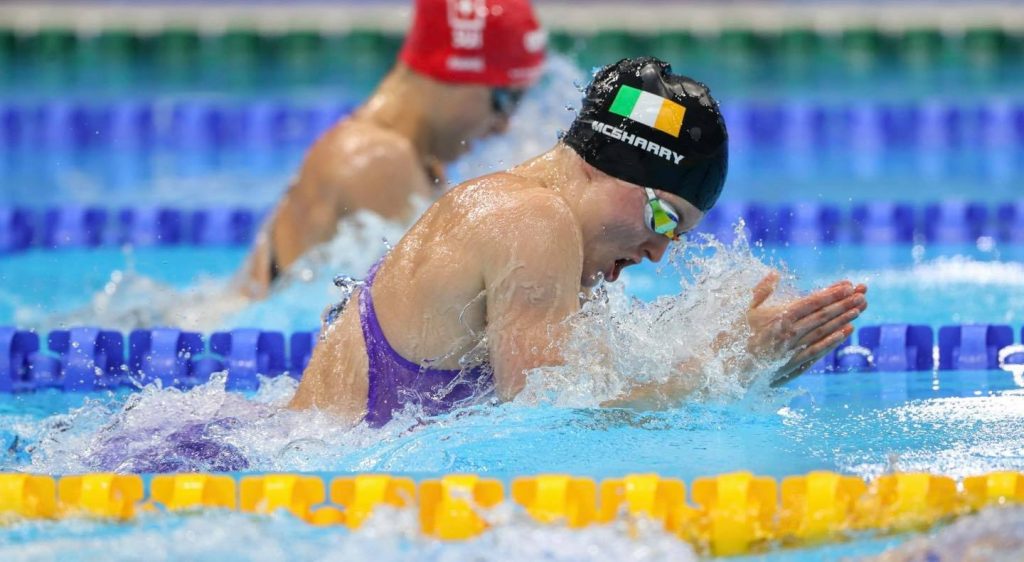 This was Ireland's first Olympic swimming Final in 25 years. She is back Wednesday for 200m Breaststroke heats!

Excluding the ROC swimmers, Mona was in the top 3 European Swimmers – with only Sweden’s Sophie Hansson who finished in a time of 1:06.07 (outside her Semi Final time of 1:05.81) and Italian Martina Carraro 1:06.19 finishing fractions of a second ahead of Mona.

What an amazing achievement for Sligo star Mona.

She has been a Major Championship winner already, setting Irish records and taking International Titles.

Darragh Greene in Men’s 200m Breaststroke
Longford’s Darragh Greene opened proceedings posting a time of 2.11.09 in Heat 5 of the Men’s 200m Breaststroke, finishing 7th in his heat, and 23rd overall. Speaking after the race, Greene was pleased with his performance, “It was good, just off my best which was a bit unfortunate, but at the same time it was a good swim. I’m going to look back and see what I can improve on.” The Longford swimmer started strong, lying fifth at the first turn, keeping his focus on his own performance.

He will compete in his favoured distance discipline 100m Breaststroke later in the week. 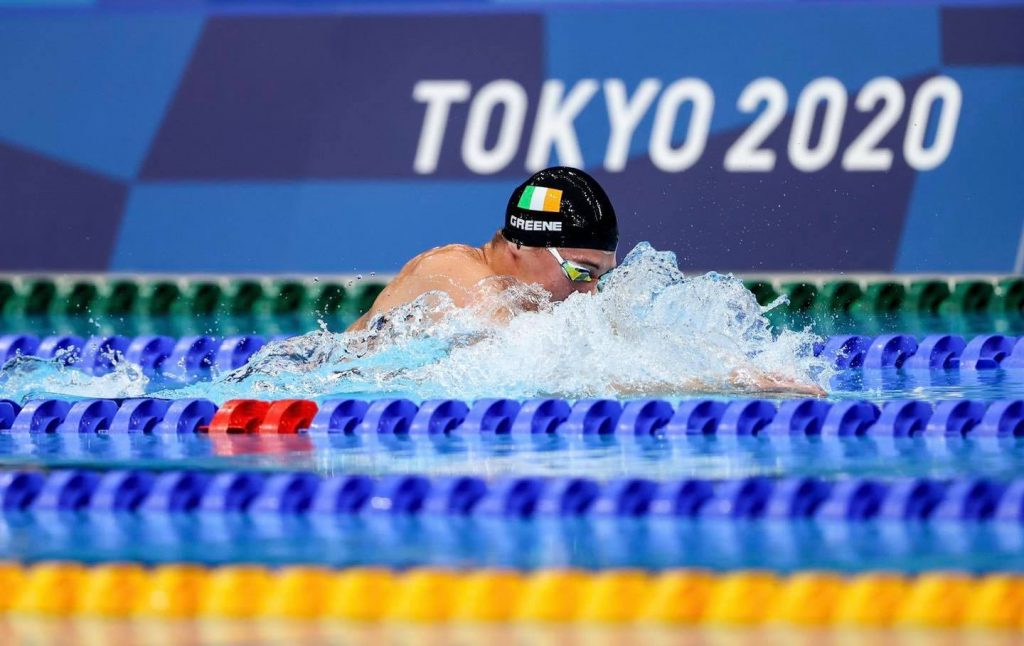 Men’s 4 X 200m Relay
For the first time in history Team Ireland fielded a Men’s 4 X 200m Relay, with Jack McMillan, Finn McGeever, Brendan Hyland and Rio Olympian Shane Ryan finishing 8th in their heat with a time of 7.15.48, resulting in a 14th place overall finish; the top eight progressed to the final. 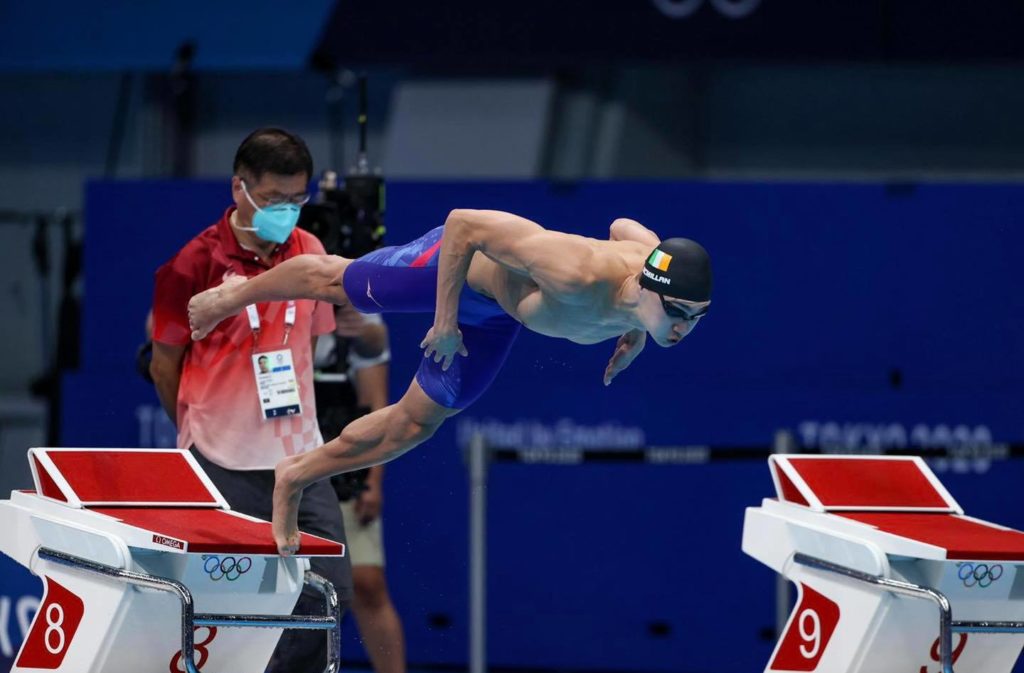 New Irish Senior Record
McMillan showed his class in his Olympic debut, clocking a time of 1:46.66 in the opening leg of the relay, putting them in fourth place at that early stage, the first time that he swam under 1:47, and swimming an Irish Senior Record.

“It’s my dream since I was a little kid, to be finally here is class,” McMillan said after his race. “The experience out there was unbelievable, once in a lifetime! It’s great to just be here and race with the lads for the relay, and we wouldn’t be here without Jordan (Sloan) and Gerry (Quinn), so a shout out to them. Hopefully we did them proud. Everyone stepped up, couldn’t ask for anything more.”

Daniel Wiffen finished off the Irish line up in today’s swimming action in incredible fashion by winning his heat in the 800m Freestyle. Wiffen stormed up the final length to secure a time of 7:51.65, beating his personal best, season best & Irish Senior Record of 7:52.68. Wiffen missed out on a top 8 qualifying spot but improved on his 24th place ranking coming into the event and finished in 14th place.

Speaking after the heat, a beaming Daniel said, “I am ecstatic! I got a Personal Best on the big stage. I came out top of the race. It is the Olympics, and I am happy to be here. I rebroke my old Irish Senior Record which is incredible. I have dropped about 20 seconds this year on it which is a lot. I felt it was like a 1v1 race at the end and I thought I have got to win this. I have got to show the nation what I am capable of. I have huge support coming from home, my parents, family and extended family. It is my mum’s birthday today so happy birthday, mum!” 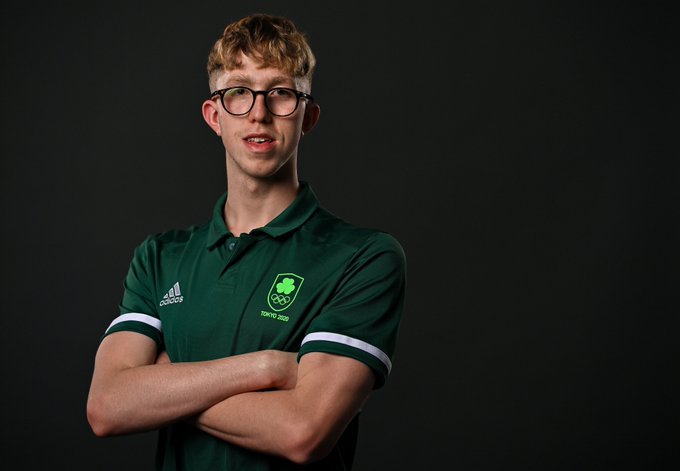 From Magheralin, Co Armagh, 20 year old Daniel, who developed with Lisburn Swimming club, is now a student at Loughborough University.