This undated picture released by North Korea's official Korean Central News Agency (KCNA) on September 3, 2017 shows North Korean leader Kim Jong-Un (C) looking at a metal casing with two bulges at an undisclosed location. North Korea has developed a hydrogen bomb which can be loaded into the country's new intercontinental ballistic missile, the official Korean Central News Agency claimed on September 3. Questions remain over whether nuclear-armed Pyongyang has successfully miniaturised its weapons, and whether it has a working H-bomb, but KCNA said that leader Kim Jong-Un had inspected such a device at the Nuclear Weapons Institute. / AFP PHOTO / KCNA VIA KNS / STR / South Korea OUT / REPUBLIC OF KOREA OUT ---EDITORS NOTE--- RESTRICTED TO EDITORIAL USE - MANDATORY CREDIT "AFP PHOTO/KCNA VIA KNS" - NO MARKETING NO ADVERTISING CAMPAIGNS - DISTRIBUTED AS A SERVICE TO CLIENTS THIS PICTURE WAS MADE AVAILABLE BY A THIRD PARTY. AFP CAN NOT INDEPENDENTLY VERIFY THE AUTHENTICITY, LOCATION, DATE AND CONTENT OF THIS IMAGE. THIS PHOTO IS DISTRIBUTED EXACTLY AS RECEIVED BY AFP. / (Photo credit should read STR/AFP/Getty Images)

AN IRISH school in Co Donegal detected a powerful tremor after North Korea launched a nuclear missile test over 5,000 miles away.

St. Columba's College in Stranorlar, Co. Donegal detected the 6.3 magnitude tremor on their seismometer in the early hours of Sunday morning, August 3.

The school's seismometer is one of the Irish National Seismic Network monitors dotted around the country to monitor the earth's movement since 2010.

According to the INSN, the recordings are consistent with the announcement by North Korea that it had conducted a nuclear test, their sixth since 2006.

Speaking to BBC News Northern Ireland, physics teacher for St. Columba's College Brendan O'Donoghue said he detected the seismic signal of an explosive event after finding out about the bomb test.

"I went looking for the signal and filtered it so I could try and isolate the blast.

"I found our seismometer had recorded it at 03:41 UTC, and the US Geographical Survey put the blast at 03:30. 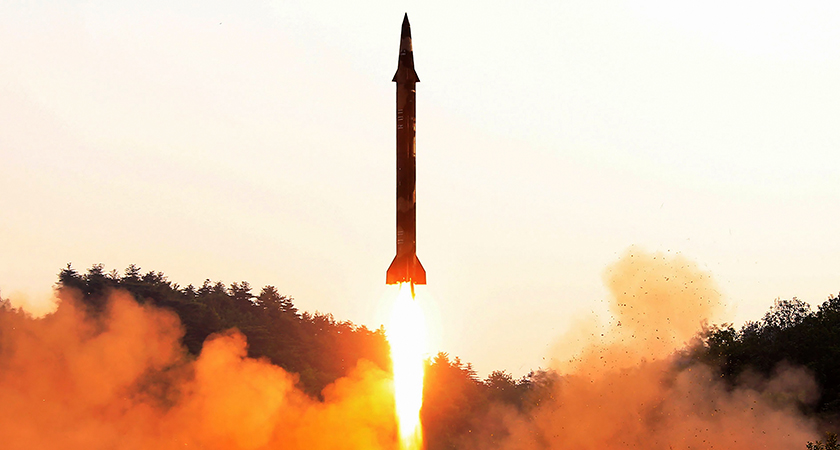 This undated photo released by North Korea's official Korean Central News Agency (KCNA) on May 30, 2017 shows a test-fire of a ballistic missile at an undisclosed location in North Korea. (Picture: STR/AFP/Getty Images)

"Previously there's been earthquakes in the Japan region that have taken 10 minutes to get to us, so I knew this must be it.

"There's a clear moment in the signal when you can see an explosion. It gives us a distinct fingerprint compared to an earthquake," Mr O'Donoghue said.

"I have a trace of a signal we recorded of a quarry blast near here and this is what this blast looks like. In a way, this explosion was one of the bigger quarry blasts the world has ever seen," he added.

Below is the recording of the North Korean nuclear test. The event occurred at 03:30 hrs UTC this morning and the signal was picked up on the college seismometer 11 minutes later.

Mr O'Donoghue said the school had been monitoring seismic events for the last seven years, and the sensitive equipment can pick up anything from waves to the 2011 tsunami in Japan.

"We've had the seismometer in the back of one of our rooms for the last seven years, it just records data all the time," he said.

"As far as this technology goes, it's a relatively cheap seismometer, but it's still very sensitive.

"It's capable of measuring very faint noise such as a truck going past. It's even picked up waves from the Atlantic when the weather has been bad.

"Usually when I bring in a print out of a signal of an earthquake thousands of miles away, [the students] laugh and can't really believe it," he said.

"It does work as a hook to teaching. In 2011, with the tsunami, we were able to tell pupils that the ground had moved for four hours afterwards by 1cm.

"And all that from something that happened across the world."