TWO women who allege they were duped into relationships with an undercover British police officer who operated in Ireland have demanded an inquiry.

The Pitchford Inquiry, which was first set up by then Home Secretary Theresa May in 2015, is currently examining the activities of undercover police officers who engaged in relationships with women over a 40-year period.

But the inquiry into the activities of the secretive unit of undercover officers only applies to England and Wales, despite calls for it to be extended to include Scotland and Northern Ireland.

Now two female activists, who allege that they had relationships with British agent Mark Kennedy in Ireland, are calling for Minister for Justice Frances Fitzgerald to push for their inclusion.

At a press conference in Buswells Hotel in Dublin, the pair alleged that they befriended Kennedy thinking he was a fellow activist in the Shell to Sea campaign.

Shell to Sea is an anti-globalisation group organised to protest a proposed offshore natural gas pipeline in the coastal area of Mayo.

Campaigners read out a statement from Sarah Hampton, a US citizen who claims she had a relationship with Mark Kennedy while in Ireland.

“He was supportive, attentive and generous, he behaved like he was in love with me. It tortures me knowing he was paid to be with me and because it was such a loving relationship, it was devastating to find out it was all a lie,” the statement read.

“I have wondered so many times if his superiors have kids; what would they think if their daughters were preyed upon like this? 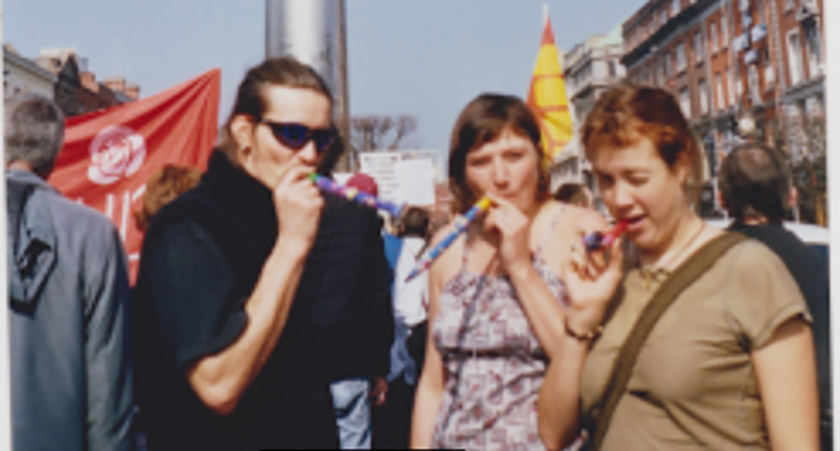 Ms Hampton said that she had received an official apology from the Metropolitan Police over distress caused to her by the relationship with one of its officers.

Another activist, Californian man Jason Kirkpatrick, claims he was spied upon during one of Mark Kennedy’s visits to Ireland and believes the Irish Government must be more transparent about the roles of British spies in Ireland.

“We have been informing the minister [Frances Fitzgerald] for months now that this British officer created serious human rights violations that the police admit,” he said.

"Kennedy was here five or six times in the Republic of Ireland. Were there wrongful or miscarriages of justice here in Ireland? That has to be investigated.

“That has to be made public. And so far Minister Fitzgerald has not even shown that she understands these issues."

Ms Fitzgerald has ordered an internal review of An Garda Síochána to determine its knowledge of Mr Kennedy's movements in Ireland.

A similar review in 2011 found no evidence of wrongdoing, although it was never publicly published.

Solicitor Darragh Mackin, who is representing the activists in their bid to extend the Pitchford Inquiry, said: “It’s clear that a British undercover agent came to Ireland. That is not disputed. It’s clear that he engaged with sexual relations with a number of individuals in what was clearly an abuse of his power.”

He added that he wants the Minister for Justice to ask the British Government to extend the inquiry to include Ireland.

In a statement, Shell to Sea said they welcomed the “internationalisation” of calls for a proper investigation into the undercover policing of their group.