THE mother of former Republic of Ireland international Austin Hayes has described the ‘wonderful’ moment she finally seen a picture of her son in an Irish kit.

Last month, 90-year-old Limerick lady Patsy Hayes wrote to The Irish Post saying she would “give anything to have a photo of Austin in an Irish shirt” after being reminded of his career having been watching Ireland perform at the European Championships. 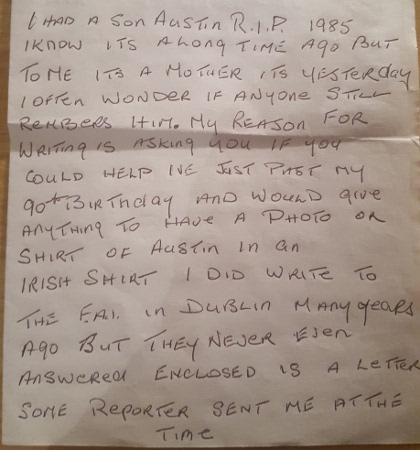 Former Southampton and Millwall forward Hayes was one of the first English-born players to turn out for the Republic when he featured against Denmark in 1979.

Sadly, Hayes died seven years later at the age of 28 after developing lung cancer, despite having never been a smoker.

His untimely death came a year after his father, also from Limerick, had passed away in a devastating 12 months for his mother Patsy.

Hayes, who was born and brought up in Hammersmith, started Ireland’s 2-0 win over Denmark alongside star names such as then player-manager Johnny Giles, Liam Brady and Don Givens, a game which was attended by 35,000 people in Dublin.

Until now, his proud mother had never seen a picture from his one and only game for Ireland, but after weeks of digging and with the help of Getty Images, The Irish Post were able to obtain and publish a rare portrait image taken before the game.

“I’ve been waiting 30 years to see this picture, it’s wonderful, just brilliant,” said an emotional Mrs Hayes upon being presented with the image by The Irish Post.

“You know, I’ve always felt as though I never knew my son; he left home when he was 15 and any time he came back he never wanted to talk about football.

“I lost my husband the year before Austin died too, but that’s life, and I’m still here. In some ways, I'm glad my husband wasn't around when Austin died, because it would have broken his heart.

"But it would just be so nice if people remembered my Austin.” 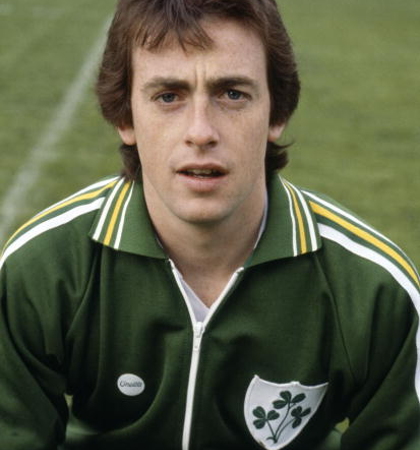 Austin Hayes pictured before the game against Denmark in 1979 [Picture: Getty/Bob Thomas]

Although Mrs Hayes - who moved to London in 1946 - specifically stated she wished to see a picture of her son in an Irish shirt, the portrait shot of her son in a pre-match tracksuit top satisfied a desire that had been burning for three decades.

As yet, it’s the only image of Hayes in Republic of Ireland attire in the public domain, but his brother Tony – a staunch collector of memorabilia from his sibling's career – believes more pictures from the match can be unearthed.

“I’m still hoping there’s more light at the end of the tunnel,” he told The Irish Post.

“This picture is brilliant – I’m made up about it – but you never know, there’s a lot of people out there, there might be more.

“But if this is the only one we ever get to see, it’s brilliant, I love it. All I can say is that you've made a Limerick lady very, very happy.”

The Football Association of Ireland (FAI) do not have any action shots of Hayes in an Ireland shirt in their archives. Do you know someone who might? Get in touch with our sports editor on 020 8900 4163 or e-mail [email protected] if so.