DEMOCRATIC PRESIDENTIAL candidate Joe Biden has paid tribute to the late John Hume after he passed away on Monday.

Despite members of his administration posting messages of sympathy to mark the Irish peacemaker's death, President Trump has - so far - (at the time of writing) remained silent.

Biden took to social media to praise Hume, who played such a key role in forging the Good Friday Agreement and bringing an end to The Troubles.

"We have lost another great man of peace," Biden wrote in a statement.

"John Hume committed his life to the principles of nonviolence, and through his faith, statesmanship, and perseverance, he helped bring Northern Ireland through the Troubles to a better tomorrow.

"He saw the power of political leadership to bring a divided people together around a common purpose, without which the Good Friday Agreement would never have come to pass.

John Hume committed his life to the principles of nonviolence, and through his faith, statesmanship, and perseverance, he helped bring Northern Ireland through the Troubles to a better tomorrow. Jill and I send our condolences to the entire Hume family. https://t.co/5QmRsj2fSb

"Jill and I send our condolences to the entire Hume family. May his leadership and the example of his life continue to inspire future generations of peacemakers and patriots to create a world more grounded in civil rights, tolerance, equality, and democratic freedoms."

Despite Mr Trump's silence, US Secretary of State Mike Pompeo shared his thoughts about the former SDPL leader, saying he displayed "integrity and courage" and played a "profoundly important role" in Northern Ireland’s transition from violence to peace.

"Throughout his career, John Hume believed that just and lasting political solutions could only be achieved through peaceful means, and as a central architect of the Belfast/Good Friday Agreement he worked tirelessly to make these aspirations a reality," Pompeo said.

"Mr Hume’s influence extended far beyond the shores where he lived. 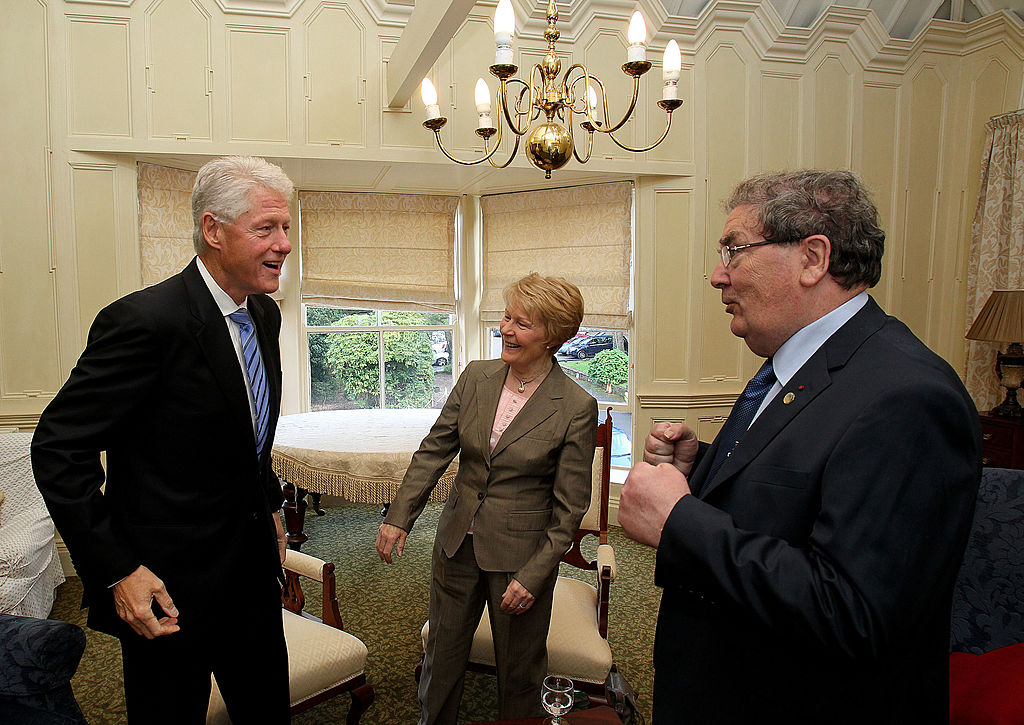 LONDONDERRY, NORTHERN IRELAND - SEPTEMBER 29: Former US President Bill Clinton greets John Hume former leader of the SDLP and his wife Pat in the Beech Hill Hotel on September 29, 2010 in Londonderry, Northern Ireland. Clinton arrived for talks on US investment in the region (Photo by Julien Behal - WPA Pool/Getty Images)

"During the darkest days of Northern Ireland’s recent past, he won the friendship and respect of countless Americans.

"His early and sustained influence in bringing US political and economic support to Northern Ireland cannot be overstated, and this profound partnership and friendship continues today.

"Many Americans who care deeply about Northern Ireland will mourn the passing of Mr Hume, and the extensive contribution that he made to build peace and to strengthen our transatlantic relations. Our thoughts are with his wife, Pat Hume, and his family at this difficult time."