THE LATEST General Election opinion poll has shown a shock surge for Sinn Féin as the party overtakes both Fine Gael and Fianna Fáil just days before Ireland takes to the polling booths.

The party, led by Mary Lou McDonald, has received its highest support ever in the latest Irish Times/ Ipsos MRBI poll, with a quarter of those surveyed indicating they will vote for Sinn Féin this Saturday. 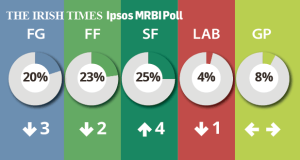 This latest poll continues the trend which has been seen since the first Irish Times/ Ipsos MRBI poll, published in January, which showed a rise in support for Sinn Féin.

The consistent surge in support has led to RTÉ reversing their decision to exclude Mary Lou McDonald in the Prime Time Leaders' Debate due to air tonight.

Despite these figures however, Sinn Féin are unlikely to form the biggest party in the newly-elected Government, as they are running just 42 candidates in 38 consitituencies.

And Fianna Fáil remains the most popular choice for government, with those surveyed indicating a preference for a coalition government involving Fianna Fáil than any other party.

While 23% of people said they would not like to see any of the options to form the next government, 17% indicated a preference for a coalition between Fianna Fáil, Labour & the Greens.

17% indicated a preference for a Fianna Fail/ Sinn Féin coalition, 14% fir both Fianna Fáil/Fine Gael and Fine Gael, Labour and the Greens.

10% had no opinion while the remaining 7% would like to see a colation between Fine Gael and Sinn Féin-- something which is extremely unlikely to happen, given that Fine Gael have repeatedly said they would never go into government with the party. 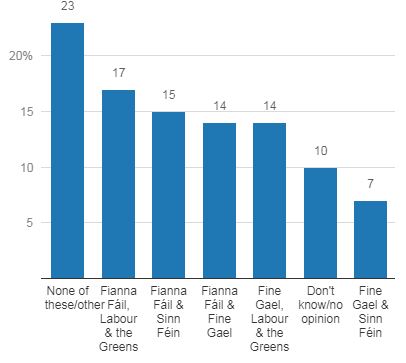 Sinn Féin, however, also remains the party that voters least want to see in power.

When asked who they would not like to see in Government, Sinn Féin were again granted first place-- but not for the reasons they would like.

36% of those surveyed said they would not like to see Sinn Féin in Government after the election, followed by Fine Gael at 32% and Fianna Fáil at 23%. 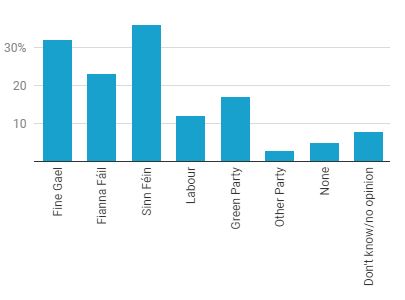 Labour, the Green Party, smaller parties and independents, as well as voters who didn't know or had no opinion, made up the remaining percentage.

These polls, along with what RTÉ has called "a change in dynamic" within the campaign, indicate that Saturday's General Election could be a historical one.

The Prime Time Leaders Debate airs tonight at 9.35pm on RTÉ One.

The full results of the Irish Times/ Ipsos MRBI poll can be found here.