SADIQ KHAN, the Labour candidate in the race to become Mayor of London, has spoken about his respect for the Irish community in Britain ahead of the forthcoming election on Thursday, May 5.

Khan exclusively told The Irish Post: "As someone who was born and bred in London I know just how much we owe the Irish community for the role they’ve played in making London great."

"Whether it’s the contribution of Irish teachers, nurses and doctors in our schools and hospitals, or the role of Irish entrepreneurs and businesses, we cannot underestimate the difference they make to our city," said Khan.

He continued: "Like many Irish people, my parents came to London to make a better life for themselves. My dad was a bus driver and my mum used to sew clothes to bring in extra money. We didn’t have much, but they were able to save up to buy a house for our family."

Scroll down to see the full list of candidates for Mayor of London...

Bookmaker Paddy Power is currently offering odds of 1/16 on Khan.

The other front runner is Conservative Party candidate, Zac Goldsmith.

Respect MP George Galloway (at odds of 80/1) is also in the running. In 2014, Galloway told The Irish Post that he would support Northern Ireland’s exit from the UK as he believes in “united countries.” 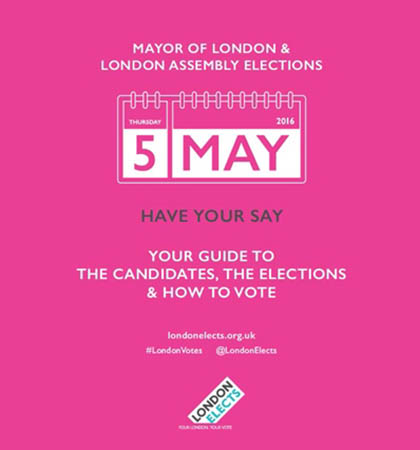 On Thursday, May 5, the Irish in London will go to the polls to elect a new Mayor of London to replace Boris Johnson and 25 London Assembly Members.

The day after polling day, the counting of votes will begin.

The full list of candidates with hyperlinks to their mini-manifestos is listed below:

For more information on the upcoming elections click here