Mr Curran had been working as an educational director for Mellon Educate to help poor children in Cape Town (Image: FB)

A MAN has been arrested and charged with the murder of Irish charity director John Curran at his apartment in Cape Town, South Africa earlier this month.

Mr Curran, a 60-year-old father-of-four from Dublin, was found dead with multiple stab wounds at a property in Buitengracht Street on the morning of Wednesday, November 7.

He had previously worked as a school principal in Dún Laoghaire, Co. Dublin and held a senior position at the Mellon Educate charity in Cape Town until September.

A 24-year-old Congolese man was arrested on Friday and appeared in court in South Africa on Monday morning charged with Mr Curran's murder.

In a statement, the South African Police Service (SAPS) said: "Thorough investigation by the Cape Town Central detectives and other SAPS members led to the arrest of a suspect for the murder of John Curran, 60, whose body was found in his room on November 7, 2018 at 09:25, at Buitengracht Street, Cape Town. 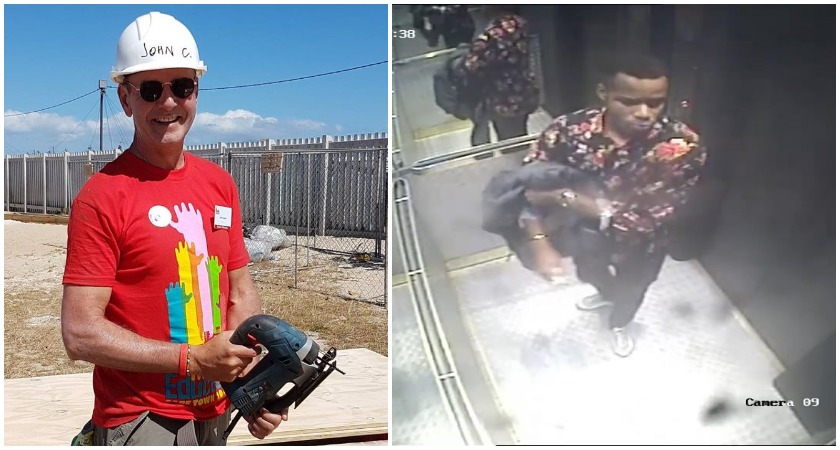 Police previously issued an image of a suspect [right] on the morning of the Irishman's murder (Image: SAPS)
"Detectives followed up on leads and a suspect was circulated.

"The 24 year old man was arrested in Voortrekker road last night and he is expected to appear in the Cape Town Magistrates’ Court on Monday, November 26, 2018 where he is facing a charge of murder.

"The provincial commissioner of the Western Cape, Lieutenant General Khombinkosi Jula commended the investigators for their dedication and living up to their mandate to bring the perpetrators to justice."

Police previously circulated images of a suspect leaving the apartment complex where Mr Curran was found dead on the morning of the attack.

The accused was granted the services of an interpreter and legal aid to seek bail at Cape Town Magistrates’ Court this morning.

The Congo native, who wore only boxer shorts, a t-shirt and flip flops to court, was not be asked to plead at the hearing.

On Friday, a memorial service was held in Dublin for Mr Curran who was about to return home to Ireland when he was killed.