A MAN who stabbed a stranger to death after lunging through his car window has been jailed for a minimum of 17 years.

Mr Murphy, 38, had gotten into an argument with Walker from his car when the latter pulled back his jacket to reveal a large knife.

Walker, who was stood out on Greenbrow Road in Wythenshawe, proceeded to threaten Shaun and his passenger with the blade.

Manchester Crown Court heard that when Shaun took out his phone and took a photo of Walker, to use as evidence when reporting the incident to police, Walker ran over to the car.

Walker proceeded to lean into the driver's side window of the deceased and stab him in the chest.

Shaun drove a short distance to escape Walker before coming to a stop.

Emergency services responded and the 38-year-old was rushed to hospital, where he later died from his injuries.

Lee Junior Walker was later arrested and charged with the murder of Shaun Murphy.

Today, Walker, of Patch Croft Road, Manchester, was sentenced to life in prison and will serve at least 17 years and six months for Shaun’s murder.

In a statement released this afternoon, Shaun's family told of their "brutal" loss. 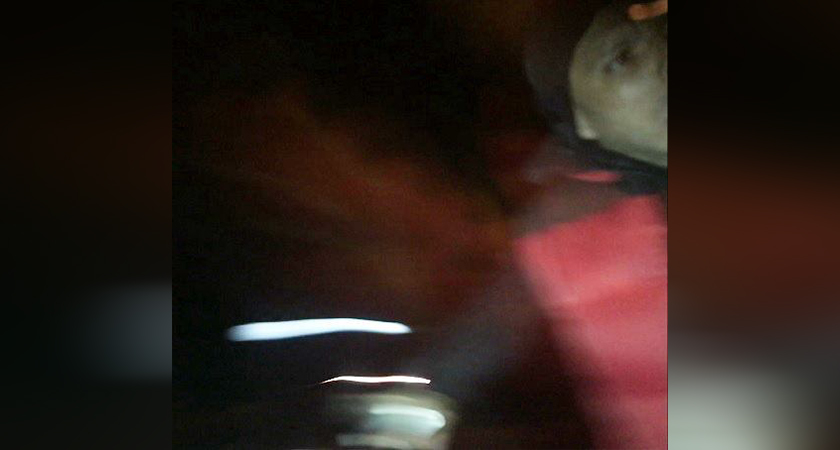 The chilling image Shaun Murphy took of his killer seconds before being stabbed (Picture: GMP)

They said: “In June last year we lost our brother Shaun in the most brutal of circumstances. He was taken from us so early in his life and we, as a family, are heartbroken.

“Shaun was at the heart of our family, the organiser, the person who would hold us all together and who was always there to help when we needed him.

“He loved his family and was an amazing father to his son Matthew whom he adored. He and Matthew had a wonderful relationship and knowing that Matthew will now have to go through life without his dad, is unimaginable.

“Shaun was a kind person who loved making people laugh, forever the joker with his silly nicknames for everyone he knew and someone who loved life.

“Shaun was a hard worker, someone who didn’t go out looking for trouble which is why we are so devastated that he was killed in such a violent manner.

“It is difficult to define how we feel about the person who killed Shaun. He still has his life while Shaun has lost his.

They added: "[Walker] has stolen our last goodbye, our future with Shaun. We feel that we have been punished too and as a family are forced to face a life sentence of our own.

“Shaun was a very special person and was loved very much. He will be missed by everyone who knew him.”

DI Richard Eales from GMP’s Major Incident Team said: “This was an awful attack. Shaun was a father and so loved by his family and they are obviously devastated by the senseless way that Shaun’s life was taken.

“Today, Lee Junior Walker has been jailed for 17 and a half years. He will spend those years contemplating his actions.

“My thoughts will always be with Shaun’s family, particularly his son. They have all acted with dignity and strength in what has been an unimaginable time.

"Whilst this sentence will never bring Shaun back, I can only hope that today’s sentence helps them feel that they have justice.”