From Ballina to Beijing - Mayo Day celebrations across the globe

MAYO people across the world will be celebrating today as the second annual Mayo Day kicks into gear.

An acknowledgement of the culture, heritage and general Mayo-ness of Mayo communities across the globe, the initiative is designed to keep them in touch with their roots and also encourage them to visit home.

It is a unique event, with no other county mounting such an ambitious project of strengthening ties between those at home and those scattered throughout the world, which takes place today (April 30).

Celebrations, concerts and pageants are due to be held everywhere, from Ballina to Beijing, with Tony Hennigan, a Manchester Mayo man who has been involved from the start, explaining: “It’s a great opportunity to celebrate your Mayo roots, wherever you are in the world. 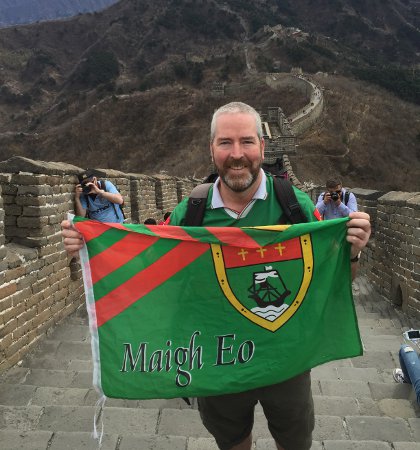 “We’ve recently been to China to promote Mayo Day and believe it or not there are quite a few Mayo people living there.”

He added: “But aside from that, with 1.4 Billion living in China and the colours green and red already being a firm favourite amongst the Chinese, we thought it was an ideal opportunity to do some promotion for the event. So we included our promotional work with a family holiday, and the Chinese people really responded to the idea.”

As well as celebrations in Beijing, neighbouring city Shanghai will also celebrate its Mayo-ness this weekend, while places as disparate as Niagara in the US, Kuala Lumpur in Malaysia, and of course London and Manchester, will all join in the festivities.

“In Manchester celebrations will begin on Friday, April 29,” explained Tony.

“The Horseshoe Pub will be staging a special tradfest session to get events rolling, and the Chorlton Irish Club will finish the weekend off with a special Mayo Day fun day organised by the Keegan Academy School of Irish Dance.

Elsewhere in the city, Fred's Ale House in Levenshulme will stage a special Mayo Day exhibition featuring events taking place from Ballina to Beijing in China.

Tony Hennigan believes this year’s event is on target to attract even more interest.

Events are also taking place in Luton today – where an Irish Music Fest, organised by the Mayo Association Luton, kicks off at Venue 360 from 8pm.

Are you celebrating Mayo Day? Send your photos to [email protected]

How long will the new year celebrations last?