MESSAGES of support have poured in for respected London Irish businessman Danny O'Sullivan as he continues to recover from a brain haemorrhage.

Mr O'Sullivan, the Kerry-born stalwart of the Irish construction industry in Britain and chairman of the Danny Sullivan Group, suffered a cerebral haemorrhage in June this year.

A Gleesk, Kells native Danny O'Sullivan moved to London in the early seventies aged 16 and later set up his successful construction company. As Chairman of the Kerry Association London he offers support to the the kingdom's new arrivals in the capital.

While Mr O'Sullivan continues his recovery surrounded by his loving family at the National Hospital for Neurology and Neurosurgery in London, his son has undertaken a mammoth cycling challenge.

Timothy O'Sullivan will cycle from Lands End - Britain's most south westerly point in Cornwall - to John O'Groats in Scotland, the very tip of the British isle in the north east next month. 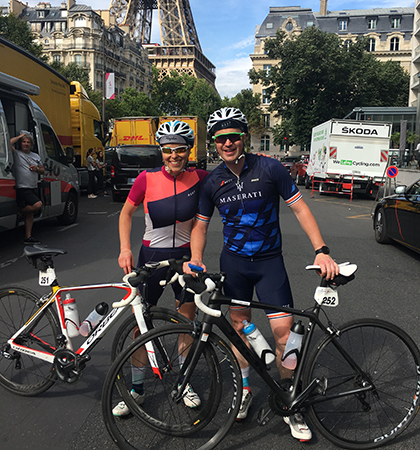 Timothy and Kacey will undertake the mammoth journey from Lands End to John O'Groats in September. (Picture: O'Sullivan family)

From September 9 to 17, Mr O'Sullivan will cycle 108 miles a day alongside his partner Kacey O'Driscoll across the 969 miles between the two points, climbing 50,000ft over the nine days - almost twice the height of Mt Everest.

The cycle is all in aid of National Brain Appeal, which is the fundraising arm of the NHNN where Danny O'Sullivan is currently receiving treatment.

Speaking on their JustGiving page, Timothy and Kacey explained: "We will be riding to raise money for the National Brain Appeal, the fundraising arm of the National Hospital for Neurology and Neurosurgery, London.

"Our choice is in honour of Tim's beloved father Danny, himself a keen cyclist and Ring of Kerry veteran, who recently suffered a cerebral hemorrhage.

"Our family have seen first hand the fantastic work the NHNN do and this is our very small way of saying 'thank you', and giving something back."

Timothy O'Sullivan also extended his thanks to everyone for their well wishes and messages of support in recent weeks, and said they are of great comfort to Danny’s wife Sheila, and the O’Sullivan family at this time.

If you wish to donate and send good wishes to Timothy and Kacey as they set off, click here.