A BRITISH politician who is to step down after admitting watching pornography on his phone in the House of Commons has claimed he was trying to look at a tractor website.

Neil Parish, the Conservative MP for Tiverton and Honiton in Devon, originally refused to step down when the accusations first emerged, saying he would await the outcome of an inquiry into the matter.

However, after having the party whip removed on Friday, the 65-year-old former farmer said yesterday that he will now resign, triggering a by-election.

However, while he said the second occasion was intentional, he claimed the first time was an accident while trying to look at tractors.

"The situation was that funnily enough, it was tractors I was looking at,” he told BBC South West.

"I did get into another website that had a very similar name and I watched it for a bit, which I shouldn't have done.

"But my crime — biggest crime — is that on another occasion I went in a second time." 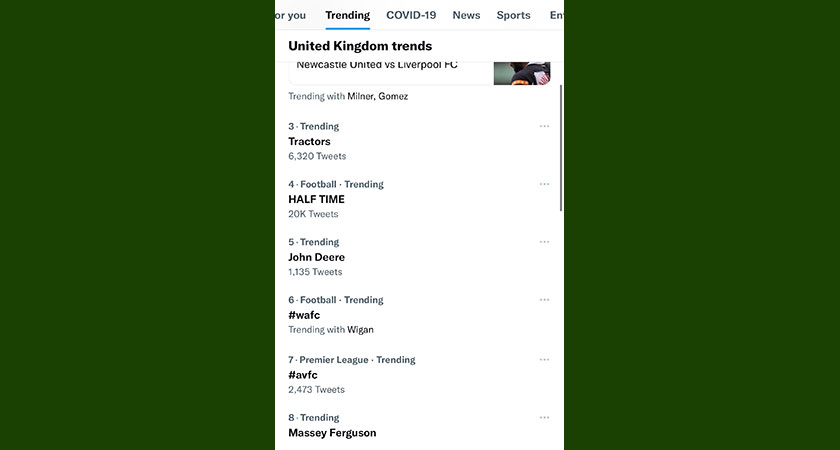 Parish's excuse drew ridicule online, with many making jokes at the MP's expense.

At one point on Saturday afternoon, the terms 'tractors', 'John Deere' and 'Massey Ferguson' were in the top 10 trends in Britain on Twitter as people poked fun at his bizarre excuse.

Even celebrities, including actor Stephen Fry and Irish comedian Chris O'Dowd, joined in the ridicule.

It starts out with harmless pictures of flatbed pickups, then it’s tractors, but the trouble is - before you know it you’re onto combine harvesters. The threshing, the bailing …

He’s going to regret that tractor nonsense. Now he can’t go even go back to his old life of hanging around tractors because all the locals will be wondering the same thing.. when’s he gonna fuck it?

“While attempting to purchase a Massey Ferguson 2245 4WD I inadvertently stumbled across a website called Extraordinary Buttholes. Once I realised my mistake I immediately logged off, twenty minutes later. This should put the matter to bed.” pic.twitter.com/1RxlGVRoca

I was trying to look at tractors in parliament but accidentally googled hardcore pornography pic.twitter.com/pzOXoq5t15

His wife has sent him a John Deere letter. https://t.co/rvuiwlkbz1

Neil Parish’s resignation interview comes across as a sketch from Little Britain:

‘Funnily enough it was tractors I was looking at.. I did get into another website that had a very similar name’ pic.twitter.com/msdQcTqkaB

One added that she had also seen him watching adult content during a committee meeting.

It was revealed on Friday that Parish was the MP at the centre of the accusations.

By: Sponsored by The Trailblazery  -  22 hours ago