'It's NOT racism!': Thomas Markle says criticism of Meghan is justified & nothing to do with skin colour

THOMAS MARKLE says recent criticism of his daughter Meghan has nothing to do with racism.

Speaking on Good Morning Britain on Monday, he told hosts Piers Morgan and Susanna Reid that the negative press surrounding the Duke and Duchess of Sussex over the last few months is "justified".

When asked about the accusations of racism, Mr Markle said: "I’m having trouble buying that, there’s never been a problem with Meghan in terms of race in her school or any place.

"I haven’t noticed it [racism] in England at all. I think England is even more liberal in some ways than the United States.

"I don’t think she is being bullied in anyway because of racism."

‘I don’t think that she is being bullied in any way or any shape because of racism.’

Thomas Markle says the negative coverage of his daughter Meghan is not racism. pic.twitter.com/AFEV10J8zf

He went on to criticise the couple's decision to preach about eco-friendly travel, while still using private planes to get around.

"I think the criticism is justified, if you're preaching to do that. Then you should be as responsible as you are preaching," he said.

Mr Markle was speaking just a few weeks after his actress daughter and Prince Harry announced they would be stepping away from their Royal duties, and carving out 'progressive new roles' within the British Royal Family.

The 75-year-old added that he was "embarrassed" by their behaviour, saying that "they've hurt the Queen."

"I think when they got married, they married into royalty and they knew what they were getting themselves into.

"I'm a little embarrassed for them and [I'm] feeling very sorry for the Queen." 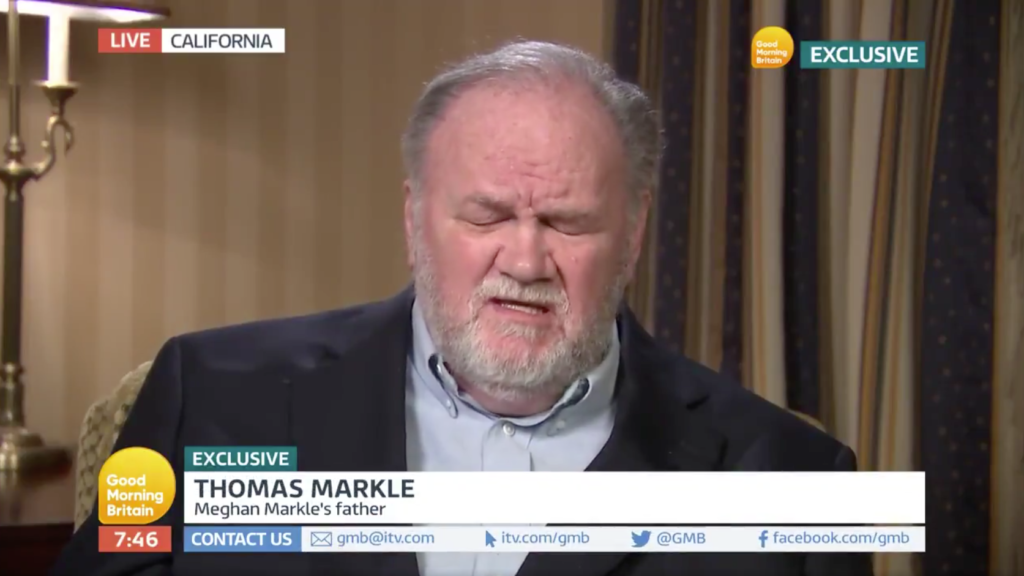 Mr Markle has spoken publicly about his estranged relationship with Meghan, and famously did not attend her wedding to Harry in 2018.

He insists that giving public interviews is the only way to reach his daughter - and his grandson Archie, who he hasn't met yet - even though he acknowledges that doing so will likely only serve to strain their relationship further.

Asked by Piers what he would tell his daughter if he could speak to her, he said: "I’d say I love you and let’s sit down and work this out, she was the closest thing to do me for years and years until she went off to college.

"And even then, this is ridiculous, let’s get together.

"It’s possible [that it could be too late] anything can happen to anyone. I just think this is kind of silly, it’s gone on too long."