FORREST Gump once said that ‘life is like a box of chocolates’ – but one infuriated Irishman has taken his mantra to a whole new level.

Cadbury removed CurlyWurly, Fudge and Chomp treats from their selection boxes last month, and a young man known only as Lee has taken the news very badly indeed.

Lee posted a brilliant letter he sent to Cadbury on Reddit for all to see – in the hope that his beloved CurlyWurlys might make a return before it’s too late. 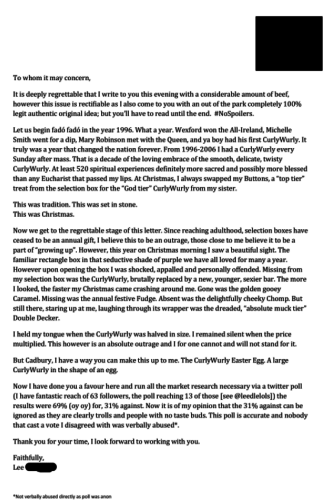 Speaking for the nation, he wrote: "Let us begin in the year 1996. What a year. Wexford won the All-lreland, Michelle Smith went for a dip, Mary Robinson met with the Queen, and ya boy had his first CurlyWurly.

"It truly was a year that changed the nation forever. From 1996 to 2006 I had a CurlyWurly every Sunday after mass. That is a decade of the loving embrace of the smooth, delicate, twisty CurlyWurly.

"At least 520 spiritual experiences definitely more sacred and possibly more blessed than any Eucharist that passed my lips.

"I held my tongue when the CurlyWurly was halved in size. I remained silent when the price multiplied.

"This however is an absolute outrage and I for one cannot and will not stand for it".

Nevertheless, Lee suggested one way Cadbury might be able to redeem themselves following their dreadful decision.

"But Cadbury, I have a way you can make this up to me,” he continued.

"Now I have done you a favour here and run all the market research necessary via a Twitter poll (I have fantastic reach of 63 followers, the poll reaching 13 of those the results were 69% for, 31% against."

Come on Cadbury, those figures speak for themselves.