PLANS to build a multi-storey carpark and shops on historic land that was once home to a forgotten Irish community have been described as 'profiteering'.

Sheila Brady, author of the book Chapel Street: 'The bravest little street in England’ has written to planners to object to a proposed application in the market town of Altrincham in Greater Manchester.

The land was sold by Trafford Council with the new development due to be completed by the end of next year.

There are plans to build luxury apartments and shops as well as a four-storey car park that will allow for 150 extra spaces on a site that was once home to a now forgotten Irish community.

But author and historian Sheila Brady says the council is 'walking over the graves' of those who lived there in the past and went on to play a key part in British history.

'The site of Chapel Street is part of the proposed Regent Road scheme. This is a historical site of national importance," she said.

"King George V recognised it as ‘the bravest little street in England’. The reasons for this - 161 men volunteered for WW1 from just 60 houses and a community of 400. At least 29 men died during the War with a further 20 shortly afterwards.

"Chapel Street was a street of lodging houses, which housed local workers and their families. It was a multi-cultural community of Welsh, Scots, English, Italian, Jewish.

"Most of the residents were Irish and Anglo-Irish who had come to the area for work in two waves, to escape famine in Ireland," she added.

The author says that after the War the men of Chapel Street organised a Roll of Honour, which listed the names of those who volunteered.

"They collected most of the money themselves and were left with a small outstanding amount, for which they approached the council for help (Altrincham Town Council)," she added.

"They were refused, one councillor was so disgusted he made a sizeable personal donation. The council made the promise to upkeep the Roll of honour, a promise which was not kept by the council.

"This led to a descendent of the Hennerly family campaigning for a Blue plaque in 2009. Once again, the council is walking over the graves of these men by selling the land and profiteering."

She has hit out at plans to include a tribute as part of the new development.

"The proposal of a square with a few benches and potted plants is not all a fitting memorial. You cannot honour the men of Chapel Street and the Great War, with a multi-storey carpark as a Cenotaph," she said.

Ms Brady says she has also made an application to the Irish Embassy in London for a plaque and registered status to be accorded to the site of former Chapel Street, in recognition of the contribution Irishmen made to the British Army and the War effort.

She is also working with Walking With the Wounded charity to raise awareness for their programs of housing.

"At this time of national housing crises for ex. armed service personnel and their families, I feel that the site of Chapel Street and Albert Street (wrongly determined as Regent Road), should be utilised for their housing need," she said.

"This would be in keeping with the rich tradition of Altrincham and its citizens. The Mayor of Greater Manchester has a personal mandate to end the plight of homelessness, of which a large percentile are ex. army.

"And to this end, I have approached Andy Burnham to take an interest in this planning application, in his capacity as Mayor of Greater Manchester." 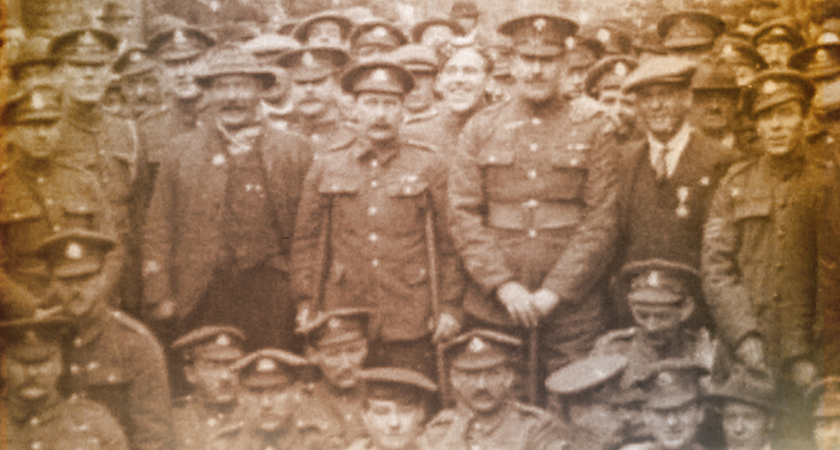 The history of Chapel Street - the untold story of unsung heroes

In 1914 Chapel Street in Altrincham Cheshire, was home to a mostly Irish community of some 400 men, women and children who had left Connaught due to the famines.

They arrived in England in two waves, seeking employment and lived as lodgers in 60 houses.

At the start of the Great War, 161 men volunteered for service in Irish, English, Welsh, Scottish and Canadian regiments and corps of army, navy and air.

These men of Ireland their descendants answered the call to help 'Little Catholic Belgium', when the Germans sacked Leuven, the Irish centre of culture and language.

For this they received the blessing of the Archbishops of Galway and Tuam.

The men served in every theatre of war including the Western Front, Gallipoli, modern Iraq - relieving the siege of Kut, Salonika (Greece) where the war was won, Italy, Suez, and Gaza. They fought against Germans, Austrians, Bulgarians and Turks.

One hundred years ago, in December 1917, Chapel Street men liberated Jerusalem and Bethlehem from the Turks after 678 years of Muslim rule.

Lloyd George called it a Christmas present for the British people.

The men were awarded many medals for gallantry including the Distinguished Conduct Medal (DCM) and Military Medal (MM), for their part in daring rescues and raids, which included saving the lives of future Prime Minister Harold Macmillan who lay injured in a slit trench on the Somme, and the father of Dick King-Smith the children's author.

Collectively, the men were shot, shelled, gassed, captured as prisoners of war, torpedoed, ship wrecked, and died of wounds. More men were recorded as 'Missing in Action' than anywhere else in Britain.

The King was moved to call it the 'Bravest little street in England'.

Fiercely proud, they organised and paid for their own Roll of Honour when the council refused help with the outstanding amount.

The original Roll of Honour and King's telegram can be viewed at Altrincham Town Hall.