18-year-old Jeni Larmour, from Newtownhamilton, Co. Armagh, was two weeks into her first term at Newcastle University in north-east England.

She was one of four people to die in suspected drugs-related incidents in the area over the weekend.

Jeni was discovered unconscious at around 6am on Saturday morning at her halls of residence in Newcastle-Upon-Tyne.

An 18-year-old man was arrested and later released on police bail while investigations into the student's death continue.

A spokesperson for Northumbria Police said: "At 6.06am on Saturday police received a report via the ambulance service of an unresponsive woman at an address on Richardson Road in Newcastle. 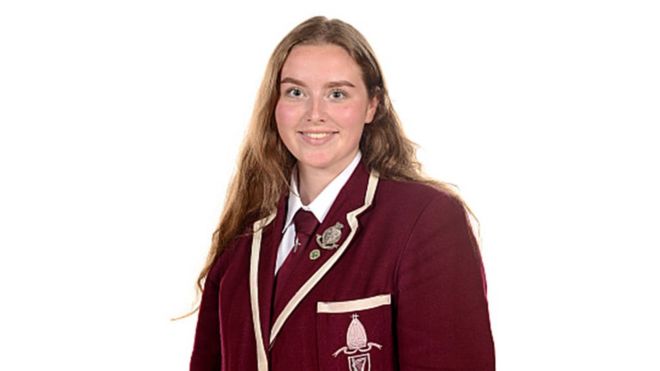 "Emergency services attended where sadly the woman - aged 18 - was pronounced dead at the scene.

Jeni was deputy head girl at The Royal School Armagh, and her former headmaster Graham Montgomery said she had been a "very vivid" pupil.

"Jeni was the sort of person, we believed, who had a great future ahead of her," Mr Montgomery said.

"The shock that the school community has felt is in proportion to the impact that Jeni had as a pupil when she was here.

"Jeni was academically very able, but she also had that personality and that vivaciousness, that desire to engage which moves you from being a student to someone who's really employable, to be someone people want to work with and want to know.

"She was involved in so many different aspects of school life, so she was a very vivid member of the school community.

"It was Jeni's ambition to attend the Royal School and she wasted none of the opportunities offered to her here. Jeni threw herself enthusiastically into school life," he added.