The RPG-7 (left) may have been used by the IRA during the Troubles in Northern Ireland (Image: Whyte's)

A DUBLIN auction house has defended its decision to sell a rocket-propelled grenade (RPG) launcher which may have been used by the IRA during the Troubles.

The RPG-7 will go under the hammer at Whyte’s Eclectic Collector Sale next month along with two inert rocket-propelled grenades, a disabled booster rocket and accessories.

Whyte’s describes Lot 247 as being consistent with those "used by the Provisional IRA in Northern Ireland from 1969 to 1998".

"The RPG-7 was used by the Provisional IRA in Northern Ireland from 1969 to 1998, most notably in Lurgan, County Armagh, where it was used against British Army observation posts and the military base at Kitchen Hill in the town. 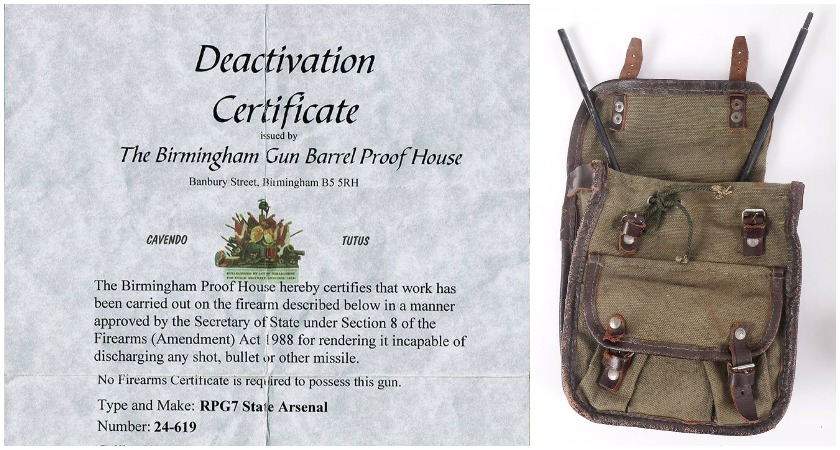 The weapon was deactivated in 2013 and comes with several accessories (Image: Whyte's)

The decommissioned RPG is just one piece to be auctioned on Saturday, April 6 under the category ‘Northern Ireland Conflict’, and is expected to fetch between €4,000 and €6,000.

Whyte’s have now defended the sale as a "part of history", adding that a number of similar militaria have been bought by collectors and exhibitors such as the Ulster Museum.

Managing director Ian Whyte told RTÉ News that the auction house sells "all sorts of weapons provided they are decommissioned and can’t be used again".

He added: "We sell weapons dating back to the beginning of time. Some of the weapons we have go back a good bit before BC.

"It was in the collection of a Republican who decided to sell off his collection."

However, Kenny Donaldson of Innocent Victims United expressed his disgust at the upcoming sale.

He told the Belfast Telegraph: "At best Whyte’s is guilty of profiting from prejudice and at its worst it is an accessory to the selling of an armament which was used to wage terror against the people of Northern Ireland.

"Undoubtedly there is something very sinister in Whyte’s marketing of the item. The product description is crass given the tool of death and destruction that the RPG-7 was in the context of this place."

The RPG-7 was issued with a deactivation certificate by Birmingham Gun Barrel Proof House in 2013, according to the paper.

A member of staff said there is no way to know if the weapon was used in an attack.