In Pictures: Elvis Costello, Imelda May and more at Royal Albert Hall Ceiliúradh

Ceiliúradh, which translates as celebration, was held in honour of the Irish President as part of the historic state visit to Britain.

The event was staged by the Irish Government and was not part of the official State Visit programme organised by the Queen and Buckingham Palace.

There was, however, members of the Royal family in attendance with President Higgins and his wife Sabina welcomed to the Royal Albert Hall by Prince and Princess Michael of Kent.

President Higgins described the event as a "wonderful and historic occasion" in a "magnificent venue".

He added: "This celebration, above all, is for the thousands of Irish people in this Hall who have made Britain their home or whose parents or grandparents did, as well as the friends, neighbours, relatives and in-laws, they have brought along.

“On a night like this, it is great to be Irish. And it is even better to share it in the company of our friends in Britain.”

The concert had been billed as celebrating the "strength and range of collaboration and creativity between Ireland and the United Kingdom" but mainly featured Irish artists. 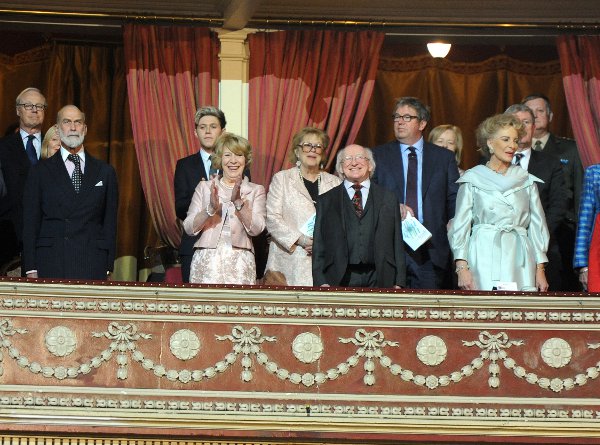 Niall Horan was sat among Irish and British politicians, the President and members of the Royal family

The special guest was singer Elvis Costello, whose real name is Declan McManus.

Among the guests were a host of Irish and British politicians, including Taoiseach Enda Kenny, Tanaiste Eamon Gilmore and former British Prime Minister John Major, as well as On Direction boyband member Niall Horan.

At the end of the concert President Higgins, who ends his four-day State Visit today, thanked the Queen and the Duke of Edinburgh for their "gracious welcome and warm hospitality" throughout his trip.

He added: "The evident grace and warmth with which they have prepared for, and arranged, my state visit is reflective of the true and deep friendship that now exists between Ireland and the United Kingdom."

The President also paid tribute to members of the Irish community in Britain, thanking them for “the fidelity you have shown to Ireland over many years; for the contribution you have made to the development of Britain; and for your part in the consolidation of an enduring friendship between our two countries".

Earlier yesterday, the Queen and President Higgins hosted a Northern Ireland-themed reception at Windsor Castle where they met politicians and those others who have made a significant contribution to the Irish peace process and public life in Northern Ireland.