MICK O'MAHONY, a pioneer of Irish banking in Britain, has retired after a 46 year career with Allied Irish Bank.

The Cork-born man, one of AIB’s longest serving and well-known bankers, began his career in 1970 when he joined the first AIB branch to be set up in Britain on London’s Kilburn High Road, and went on to managed some of AIB’s best performing branches in Britain.

Not long into his career, Mick found himself looking down the barrel of a gun during a bank raid at the Kilburn branch in 1971.

During the raid, one of the robbers let off a warning shot close to Mick’s head, before the gang made off with £100,000.

When the robbers had left, his colleague George Glendon called out “Mick, are you alive?”, Mick replied “George, I think I am”.

Both Mick and George were present at the retirement party to relive the tale. 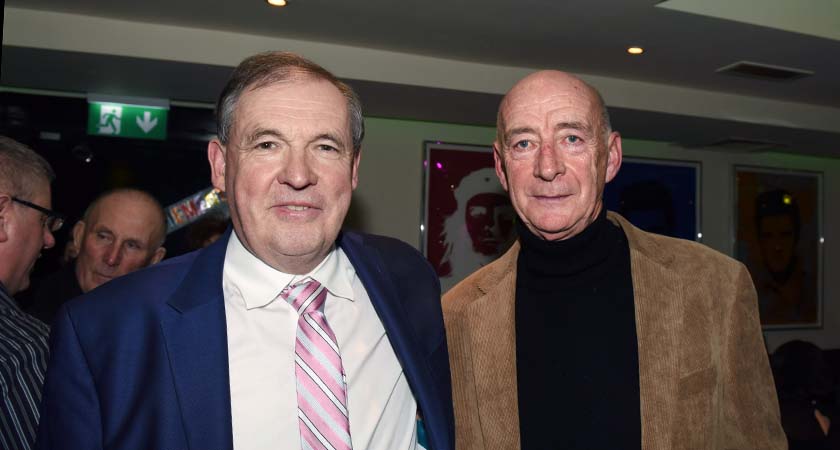 Mick and ex AIB Kilburn branch colleague George Glendon, who were both present during the bank raid.

After three years in London, Mick moved to Dublin to take up a position at AIB’s Mary Street branch, where he stayed for the next six and a half years, before returning to London in 1979 as Assistant Manager at the Holloway Road branch.

He held this role for the next 10 years and was part of the executive committee of the London Irish Centre that helped steer it through some difficult times.

In 1990 he took up the position of Manager at the Kilburn branch and built up a strong relationship with the bank’s clients, many of them Irish, and the branch soon became the AIB’s best performing branch in Britain.

In 2006 Mick moved to the Hampstead branch as Senior Manager Corporate Business where he has been for the past 10 years.

This period proved to be one of the most challenging times of his career as it coincided with the global recession.

In his 46 year career, Mick O’Mahony became a well known figure throughout the Irish community in London and is known as a great networker, with a passion for golf and Manchester United football club.

A large number of family, friends, clients and colleagues past and present joined Mick at his recent retirement party at Kelly’s Bar in Hendon, North West London.