The abandoned city centre building has been commemorated by a plaque.

Apollo House was taken over by concerned Irish citizens and artists to provide for the homeless people of Dublin.

The vacant building was occupated by HomeSweetHome, a charity and activist group that decided to to take the matter of homelessness into their own hands.

The intervention was publicly supported by musicians such as Hozier and Glen Hansard who made their wishes for homelessness levels to be decimated.

The building was, at one point, home to more than 30 homeless people, with volunteers having to reject people who wanted to seek refuge due to demand. 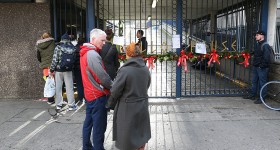 Last week saw the deaths of two Irish people sleeping on the streets, which has only intensified public criticism of the government's unwillingness to help the homeless.

The public outcry for more resources to aid the homeless is surely to only get louder with the addition of a new plaque outside the building.

Erected on the outside wall of the vacant building, a new bronze plaque reads "We have people without homes and homes without people. Mission not completed. Vulture Republic 1916-2017 In memory of those who died in homelessness".

The plaque also features the picture of a vulture sitting atop a harp, with one string snapped, perhaps a warning to those in power that the people of Ireland will soon snap also if they don't begin to provide for those without a home.

People on Twitter uploaded photos of the new plaque overnight.

This astonishing bronze plaque was anonymously embedded into the outside wall of #ApolloHouse last night. pic.twitter.com/0BUALXBw7S

A young woman places flowers at a memorial to those who died homeless, erected at Dublin’s #Apollohouse#HomeSweetHome pic.twitter.com/BMNN0pwVlw

Somebody placed this beautiful memorial plaque on the soon to be demolished Apollo House overnight.

It's not known who designed the plaque nor resurrected it as of yet.