CONCERN is growing for an Irish woman who has been missing from Brent for 11 days.

Mary Higgins, 54, was last seen by her son at home in Wyborne Way in Stonebridge, Brent on Tuesday, December 27 at 8pm. 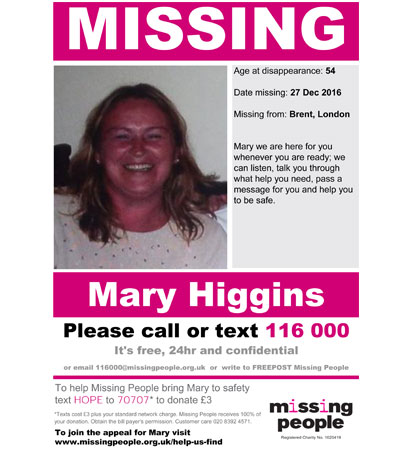 Miss Higgins, who was born near Westport, Co. Mayo, is described as white, of medium build with hazel eyes and shoulder length brown hair and an Irish accent.

She was believed to be wearing a dark hooded top, tracksuit bottoms and a dark jacket at the time of her disappearance.

In a statement, they said: "North-west London is where she knows best. As a family we are getting increasingly concerned for her welfare and if anyone has seen her please call police on 101."

Police have described her disappearance as being out of character.

A helicopter from the National Police Air Service was involved in the search from Miss Higgins two days after her disappearance.

Brent Police have appealed for anyone who has seen Miss Higgins to call 101.

DI Lee Dawson said: “Mary’s disappearance is unusual, and her family are becoming more worried with each passing day.

“If you have seen Mary or know where she is, we would urge you to contact police immediately.”