AT LEAST four people have been critically injured in an explosion at a Polish convenience store in Leicester.

The 'major incident' is not thought to be terror related, according to police.

Leicestershire Fire and Rescue first responded to reports of a blast at a shop on Hinckley Road at 7.03pm this evening.

Six fire engines were requested and the incident was being treated as a search and rescue operation as of 9pm.

Leicestershire Police tweeted shortly after the explosion: "There has been a major incident on Hinckley Road, Leicester.

BREAKING - UK: Police and fire department respond to ‘major incident’ in Leicester, after reports of explosion. Details to follow. pic.twitter.com/V3Wld9Z21Z

"All emergency services are currently dealing with this. Carlisle Street and part of Hinckley Road have been closed  Please avoid the area."

Images from the scene showed debris was blasted across both carriageways of the road after the explosion, which destroyed both the delicatessen and residential flats above.

Four people are in a critical condition after being rushed to the Leicester Royal Infirmary.

The shop is thought to have been open at the time. 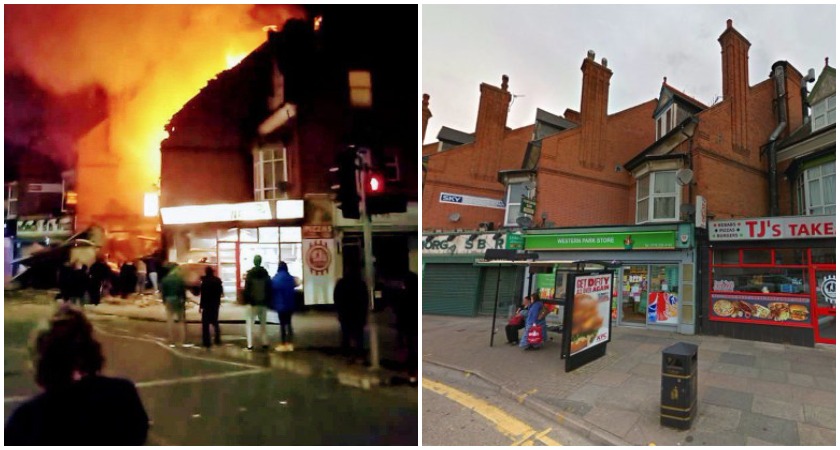 Before and after: The green shop and flats above have been completely destroyed (Picture: Twitter/Google Maps)

Local residents have told of hearing a "massive" blast at around 7pm.

One said: "We went to look out of the upstairs windows and saw loads of smoke, and then a few seconds later massive orange flames."

19:19 |There has been a major incident on Hinckley Road, Leicester. All emergency services are currently dealing with this. Carlisle Street and part of Hinckley Road have been closed Please avoid the area.