Have you seen this man?: The PSNI are "urgently seeking to identify" the man in the image (PSNI)

POLICE OFFICERS investigating the spate of random attacks on women in Belfast on Tuesday night have released CCTV footage of a man they "urgently" wish to speak with.

According to the Police Service of Northern Ireland (PSNI), they are "urgently seeking to identify" the man seen in an image which they released to the public yesterday evening. 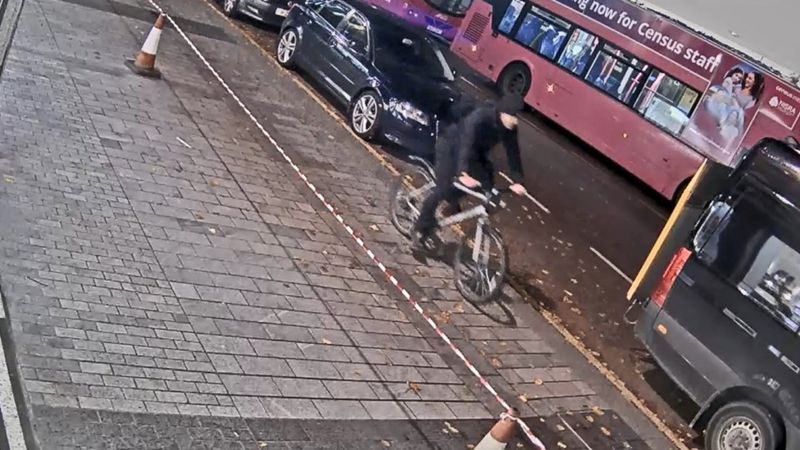 Have you seen this man?: The PSNI are "urgently seeking to identify" the man in the image (PSNI)

It was initially reported that five women were stabbed or punched by the man, who travelled around the city on a mountain bike, but it is understood the PSNI have identified an attack on another woman after examining CCTV evidence.

The attacks began at around 8pm on Tuesday 13 October, and continued for over an hour.

“The three women were all taken to hospital for treatment to their injuries which are not believed to be life threatening.

“A fourth incident was reported to police where a female was punched in the neck on the Lisburn Road near Dunluce Avenue at around 9pm and we believe this to have been carried out by the same man.

“A fifth incident was reported this morning whereby a female was punched to the head on the Dublin Road at around 8.55pm yesterday evening by a male on a bicycle and we believe this report may be linked to the other four incidents.

He later provided an update confirming one victim was stabbed in the arm, one in the neck and one in the leg, and two others were punched in the head and neck.

Ch Superintendent Walls also admitted there was a "significant concern" that the man could commit further attacks, as "we don't see this sort of situation" often and the man has yet to be identified or arrested.

The suspect is described as a male wearing dark clothing, cycling a mountain bike which may have a light coloured frame and reflectors on the spokes. Police believe he may have been wearing a black mask at the time of the attacks.

Officers are performing CCTV checks and enquiries in the areas in which the attacks were reported, and have urged any witnesses, including motorists who were in the area at the time who may have dash-cam footage, or business owners with CCTV footage, to contact them immediately.

Anyone with information which could lead to the arrest of the suspect is asked to contact police at Lisburn Road on 101, or submit a report online using this form.

Any witnesses who wish to remain anonymous can also contact Crimestoppers on 0800 555 111 or online (here).