POPE Francis has joined the thousands who sent messages of support to all those affected by the tragic helicopter crash in Glasgow.

"I assure you of my prayers for those who have tragically lost their lives or have been injured as well as their relatives,” he said.

At least nine people were killed and over 30 injured on Friday night when an aircraft crashed into the city’s Clutha pub.

Police have now released the names of the remaining four victims after the recovery operation ended on Monday evening.

Mr McGarrigle, 57, was a popular Glasgow poet with roots in Letterkenny, Co. Donegal. He was initially regarded as missing but police have now confirmed that he was inside The Clutha when the crash happened.

His son John Jr expressed his frustration with the delay and lack of information that he was given following the incident.

The three dead helicopter crew were pilot David Traill, 51, and PCs Kirsty Nelis, 36, and Tony Collins, 43, and two men who were killed in the pub were named as Samuel McGhee, 56, of Glasgow, and 48-year-old Gary Arthur, from Paisley, Renfrewshire.

Deputy Chief Constable Rose Fitzpatrick said: "Our thoughts first and foremost are with the families and friends of all those who have died.

"As our investigation continues we will of course go on providing support to the families involved." 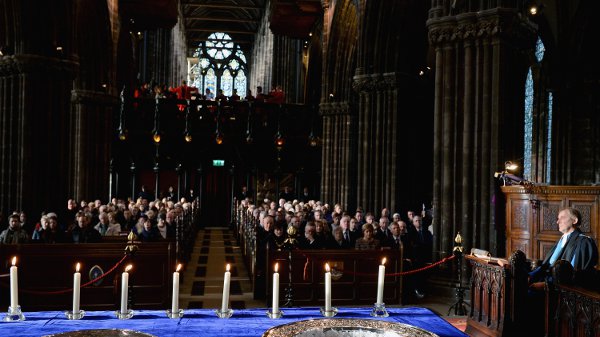 She said the “difficult and complex” recovery operation had involved "painstaking work and the skills of specialist personnel from across the emergency services".

People have been left in “disbelief” by the heart-breaking incident, with mourners passing through nearby churches to seek refuge and reflect.

St Andrew’s Catholic Cathedral saw mourners in the immediate aftermath of the incident, with more than 100 people coming through its doors directly from the scene.

“There was a mood of shock,” said Monsignor Christopher McElroy. “People would know the pub personally or would know people who visited it. It could have been anyone in there.”

He added that the Cathedral, which sits at the edge of the police cordon, will keep its doors open throughout the week to support families and friends of victims visiting the scene.

A further 11 people remain in hospital where they are being treated for a range of conditions including bone fractures, spinal injuries, lacerations, chest and head injuries.