RALLIES in support of victims of rape are taking place in cities across the island of Ireland today.

#IBelieveHer has been trending online after two Ulster and Ireland rugby players were found not guilty of rape yesterday.

Gatherings in Dublin, Belfast, Derry, Limerick, Galway, Waterford and Cork are underways with thousands taking to the streets.

Around 2,000 popele are in Dublin with a larger march being planned in the city on Saturday afternoon.

All four defendants in the Belfast rape trial involving two Ireland rugby internationals were found not guilty on all charges.

Paddy Jackson, 26, and Stuart Olding, 24, were acquitted of raping the same woman at a party in Jackson’s south Belfast home in June 2016.

The eight men and three women of the jury delivered their verdict after three hours and 45 minutes. 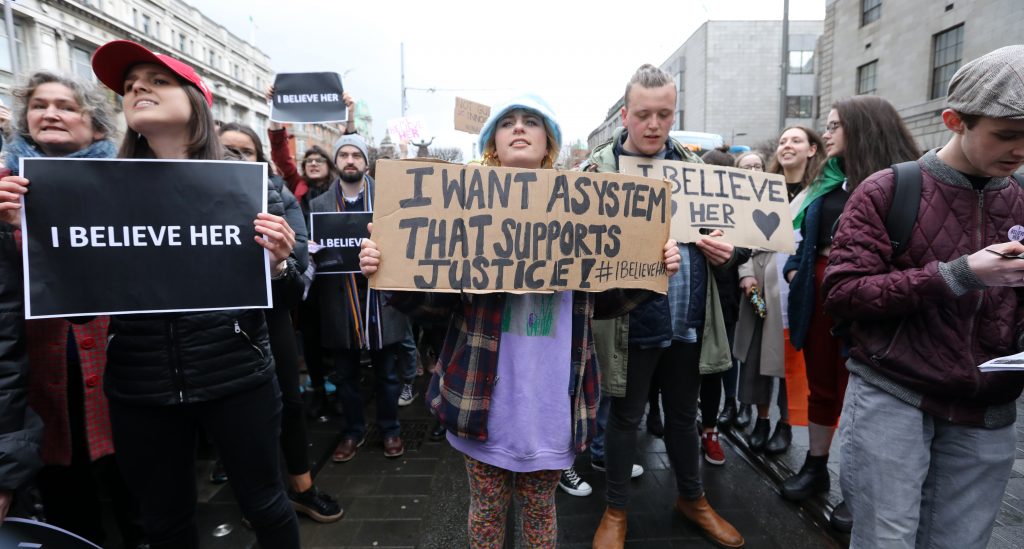 Protestors on O'Connell Street in Dublin today as thousands of women and men came out to a rally in support of victims of rape Photo: Eamonn Farrell/RollingNews.ie

In the aftermath of the verdict #IBelieveHer began to trend in Ireland.

Today's rally in Belfast outside Laganside Court has been organised by Reclaim the Night who said in a post in Facebook: "Our criminal justice system is not fit for purpose when it comes to dealing with sexual crimes.

"We need adequately resourced support services for victims and survivors of rape and sexual abuse."

I was at the Cork rally today to show solidarity for survivors of sexual assault, rape and abuse #IBelieveHer pic.twitter.com/66STYKaCsA

Ruth Coppinger, Solidarity TD for Dublin West, called on people to attend the rally in the Irish capital.

"[It's] essential that we stand up against sexism, and culture where rape survivors are put on trial," she said.

Please go along to #ibelieveher rally against rape culture, 12:30pm, The Spire, o'Connell Street, Dublin. Essential that we stand up against sexism, and culture where rape survivors are put on trial.#dubw

By: James Conor Patterson  -  10 minutes ago