U2 AND Michael Flatley have retained their place among Britain and Ireland’s 20 richest musicians.

Singer Adele is the richest musician under 30 according to the new Sunday Times Rich List.

The 29-year-old Hello star, who also appears in the main Rich List for the first time this year, is now worth a cool £125million.

Having increased her fortune by almost 50 per cent – £40m – in the past year alone, she is the joint 19th richest musician in the Music Rich List, along with Queen guitarist Brian May.

Her fortune of £125m makes her around £75m less well off than Irish dancer extraordinaire Michael Flatley, whose fortune has increased by £2m in the last 12 months to make him joint 8th on the list.

That’s five places behind Dublin quartet U2, who have increased their own fortune by no less than £48m this year.

Four decades after they formed, the band continue to sell out concerts worldwide. Their Joshua Tree tour begins this month and includes 33 concerts across nine countries.

Their royalty income has also been largely tax-free since they moved operations to the Netherlands in 2005.

At 160 pages this year’s Sunday Times Rich List - the 29th annual edition to be produced - is the biggest ever.

The definitive guide to wealth charts the fortunes of the 1,000 richest individuals and families in Britain and Ireland.

Robert Watts, the Compiler of The Sunday Times Rich List 2017, said: “What a year for Adele. Such strong record sales and a busy touring schedule propel her into our main list for the first time.

"Still in her 20s, if Adele’s career lasts as long as many of the other entries in our list, she has the potential to be the highest-earning British musician of all time.

“The rises we have seen from the Rolling Stones and other older bands are very striking.

"Many of these groups continue to play lucrative gigs well-into their 70s - with their wealthier fans prepared to stump up more for their tickets than younger fans of new acts.

“It seems rock music - be it performing or watching - is no longer just for the young.”

Sir Paul McCartney and Nancy Shevell, who top the list, are now worth £780m, with this year’s £20m increase largely thanks to McCartney’s continued live performances and online sales.

McCartney, 74, is still recording music and touring, most recently playing three concerts in Japan in April.

His fortune certainly wasn’t hurt by a deal signed in 2015 to allow The Beatles’ 13 albums to be played on music streaming services such as Spotify and Apple Music. 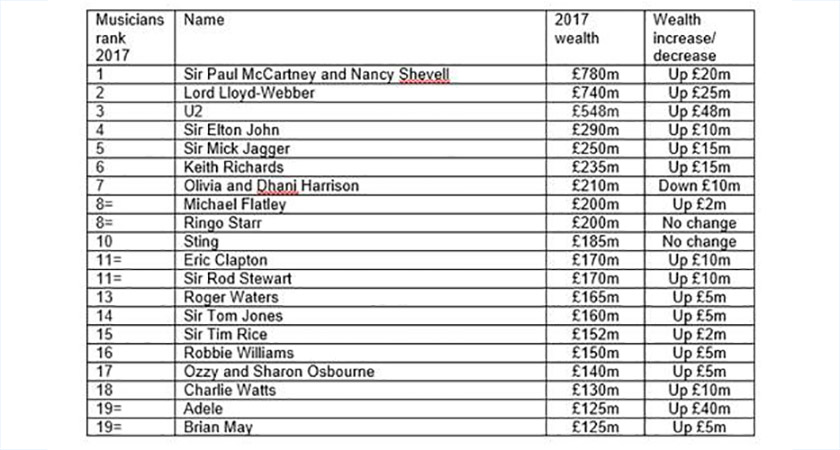