A SECONDARY school in County Cork went into lockdown yesterday after a hoax call to Gardaí which claimed a man was on the premises armed with a knife.

Students in Coláiste Chríost Rí, which is based in the Turner’s Cross area of Cork city, were led into the school’s sports hall by teachers where they were kept for several hours before the Gardaí confirmed there was no threat.

A student in the all-boys school posted about the experience on Reddit, saying "I spent my Monday afternoon in a sports hall with 600 students during a lockdown". He praised police for their actions, saying the Gardaí were “on the ball”.

The student shared a message from the Principal which was sent to parents and guardians, which said:

“As you may be aware our school building was evacuated today after Gardai received what turned out to be a hoax call that someone from outside our school community had entered the school premises with a knife. 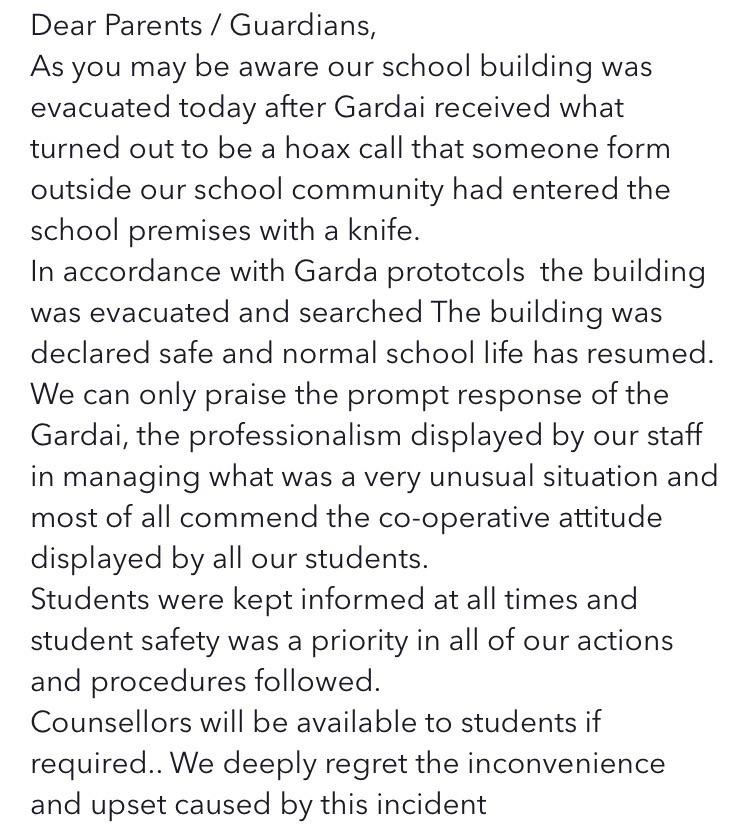 In accordance with Garda protocols the building was evacuated and searched. The building was declared safe and normal school life has resumed. We can only praise the prompt response of the Gardai, the professionalism displayed by our staff in managing what was a very unusual situation and most of all commend the co-operative attitude displayed by all our students.

Students were kept informed at all times and student safety was a priority in all of our actions and procedures followed.”

The message went on to say that counsellors would be available to students if required, but the student who posted on Reddit said it likely wouldn’t be needed as nobody had seemed to be scared, although there was a parent crying at the school gates.

The hoax caller has yet to be identified.