A BISHOP has ruled that a Catholic school in Massachusetts can no longer identify as Catholic after it refused to remove Pride and Black Lives Matter (BLM) flags from its buildings.

The Nativity School of Worcester began flying the flags in January 2021 to express support for making communities more inclusive.

It has rejected recent requests from Bishop Robert J. McManus of the Diocese of Worcester to remove the flags.

As a result, Bishop McManus this week decreed that — among other rulings — the school is 'prohibited from this time forward from identifying itself as a "Catholic" school and may no longer use the title "Catholic" to describe itself'.

However, school President Thomas McKenney has vowed to continue flying the flags while the school appeals the decision.

In his decree on Thursday, Bishop McManus said the flags contradict Church teaching and send a 'mixed, confusing and scandalous message to the public' about the Church's stance on the issues.

He said the Pride flag represents support for gay marriage and for actively living a LGBTQ+ lifestyle, which is contrary to Catholic social and moral teaching.

The Bishop added that while the Church supports the principle that 'black lives matter' and affirms that all lives matter, he believes the phrase has been co-opted by the BLM movement, which promotes a platform that contradicts Catholic social teaching. 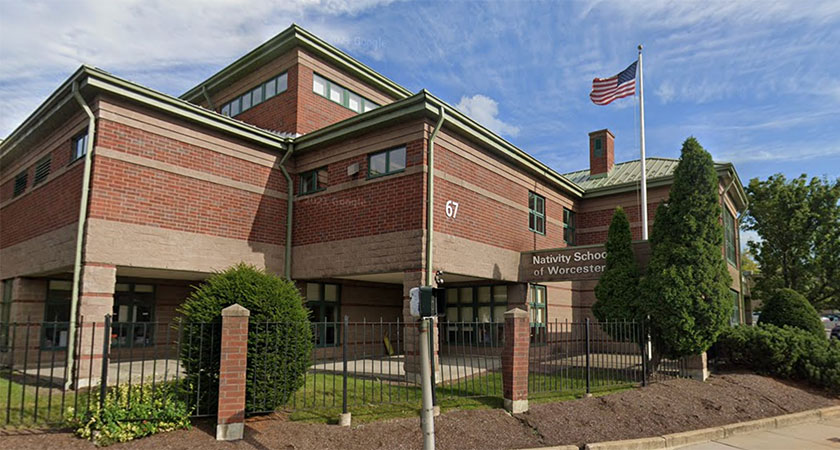 Bishop McManus said the school's refusal to remove the flags undermined both Catholic teaching and his authority, leaving him with no option but to take action.

He has now ordered the school to refrain from identifying as Catholic and from using Catholic to identify itself.

Mass and sacraments can no longer be celebrated at the school, nor can it undertake any fundraising involving diocesan institutions.

Bishop McManus also ordered the name of Bishop Emeritus Daniel P. Reilly — his predecessor as Bishop of Worcester — be removed from the list of the school's Board of Trustees.

However, in a statement released this week, Mr McKinney said the flags — which were torn down in March after the Bishop's initial call for their removal — would remain.

"As a multicultural school, the flags represent the inclusion and respect of all people," said Mr McKinney.

"These flags simply state that all are welcome at Nativity and this value of inclusion is rooted in Catholic teaching."

He added: "Nativity will seek to appeal the decision of the Diocese to remove our Catholic identity through the appropriate channels provided by the Church in circumstances like this.

"At the same time, after meaningful deliberation and discernment by its Board, leadership team, faculty, and partners, Nativity will continue to display the flags in question to give visible witness to the school's solidarity with our students, families, and their communities.

"Commitment to our mission, grounded and animated by Gospel values, Catholic Social Teaching, and our Jesuit heritage compels us to do so."

Founded in 2003, Nativity is as an independent, Catholic, Jesuit middle school that provides tuition-free education to boys from under-resourced communities.

The only school in Central Massachusetts that solely educates students experiencing economic insecurity, it receives no funding from the Diocese.