SINN FÉIN has called on the Irish Football Association (IFA) to cancel a proposed friendly with Israel at Belfast’s Windsor Park.

Doing so would send a message that the ‘slaughter of Palestinians… is completely unacceptable’, according to the party’s spokesperson for Culture, Arts and Sport, Sinéad Ennis.

However the Ulster Unionist Party’s sports spokesperson, Andy Allen, said the match is being ‘hijacked by others with their own political agendas’.

Sinn Feín’s call comes after a change.org petition set up by BDS Ireland urging the IFA to scrape the game amassed over 5,000 signatures.

Ms Ennis, MLA for South Down, said: “Since March, the Israeli military have slaughtered over 160 Palestinians in Gaza including men, women and children taking part in peaceful demonstrations.

She added: “The collapse of the South African apartheid regime proved the effectiveness of cultural, academic and economic boycott as a way of securing change. 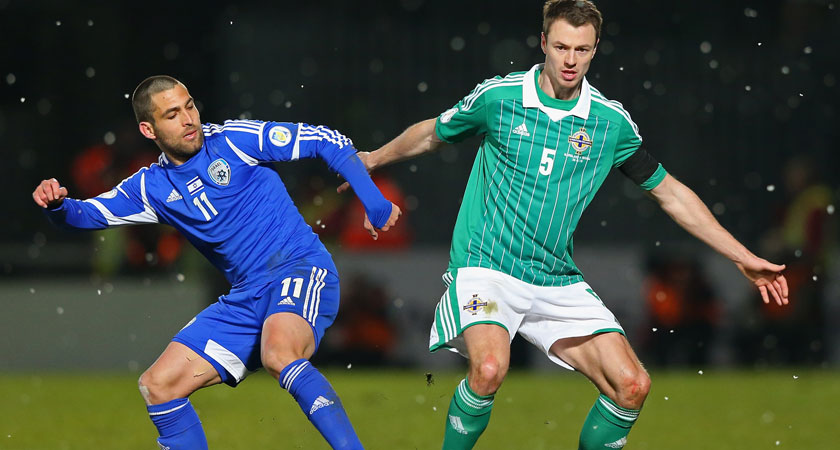 The last meeting between the sides at Windsor Park was a World Cup Qualifier in March 2013 (Image: Getty)

“Once again, I am calling on the IFA to respect the rights of Palestinians by cancelling this match and sending out a strong signal that the slaughter of Palestinians in the open-air prison which is Gaza, is completely unacceptable.”

The party has organised a protest at Belfast’s International Wall this Saturday at noon in opposition to the match.

Since the fixture was announced in February, the IFA has indicated several times that it has no plans to cancel next Tuesday’s match.

UUP MLA Mr Allen condemned those attempting to ‘force’ the governing body into changing its decision.

“I suspect that many of those who are demanding the game should be scrapped are not football fans and they certainly aren’t Northern Ireland fans,” he said.

“Indeed, given some comments on social media it is clear that a number of them would deny both Northern Ireland and Israel’s right to exist.

“The bottom line is that the IFA and the Israeli FA are members of both UEFA and FIFA.

“When it comes to friendly matches, the IFA has both the independence and freedom to decide who Northern Ireland should play.”

He added: “Football should not be hijacked by others with their own political agendas.”