A DAMNING report published yesterday has concluded that there was collusion between Irish police officers and the IRA over the murders of two RUC men during the Troubles.

The Smithwick Tribunal found that the IRA were given information about the movements of Chief Superintendent Harry Breen and Superintendent Bob Buchanan on the day they were killed, from an unidentified person within the Dundalk Garda station in 1989.

The tribunal, which was established in 2005, identified collusion.

However, based on evidence, they could not link the collusion to any named officer in the Co Louth Garda station.

The report heavily criticised the culture within the Garda and inquiry chairman Judge Peter Smithwick accused the Gardai of focusing on its reputation rather than the truth.

''This was an example of the prioritisation of political expediency in the short term, without due regard to the rights of victims and the importance of placing justice at the centre of any policing system,'' he said.

"The integrity of and confidence in An Garda Síochána can properly be maintained only if suggestions of inappropriate or illegal conduct by members are taken seriously, transparently and thoroughly investigated and, above all, not tolerated or ignored on the basis of some misguided sense of loyalty to the force or to its members,” he said. 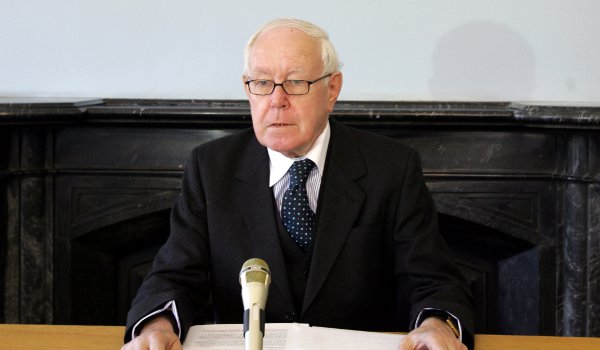 The Irish Government has apologised to the families of the two officers and promised to carefully consider the tribunal’s recommendations.

“The actions documented in this report are a betrayal of the values and the very ethos of an Garda Síochána, as the guardians of peace,” said Tánaiste Eamon Gilmore.

The officers were killed on March 20 1989 near the Border in south Armagh shortly after a meeting with Garda in Dundalk.

They were in civilian clothes and neither was carrying a weapon.

On their way home on the Edenappa Road near Jonesborough a gang of up to six armed IRA men approached them.

Mr Buchanan attempted to reverse the Vauxhall Cavalier out of danger but got stuck in a ditch and was shot several times in the driver's seat.

Mr Breen got out of the car and tried to surrender. He walked to the front of the car with his hands up but was shot several times.

The tribunal found that if the Garda had shared intelligence with the RUC that Supt Buchanan was on an IRA kill list the officers could have been saved.

They were the highest ranking RUC officers to be killed during the Troubles.