THE IRISH Government will offer further financial support to Manchester’s Irish World Heritage Centre as it enters its second phase of development, Taoiseach Enda Kenny has told The Irish Post.

As he officially opened the first phase of the £10million complex today, the Taoiseach pledged that the Irish Government would “continue to support [the centre] as it looks towards its second phase."

"As our economy continues to improve at home it allows us to support more developments like this," he added.

The Irish Government have already contributed upwards of £1m in funding for the Centre, which has been in operation for just over a year.

Tomorrow the Taoiseach will meet with Prime Minister David Cameron in London where the two leaders will address the uncertainty over British plans to purchase wind-generated power from the Republic of Ireland.

Those plans - involving the building of hundreds of wind turbines in Ireland - are reportedly on hold after Labour’s Pat Rabbitte revealed that the countries have failed to agree terms.

Mr Kenny told the Irish Post that: "We will discuss that tomorrow and see what can be done to move it forward." 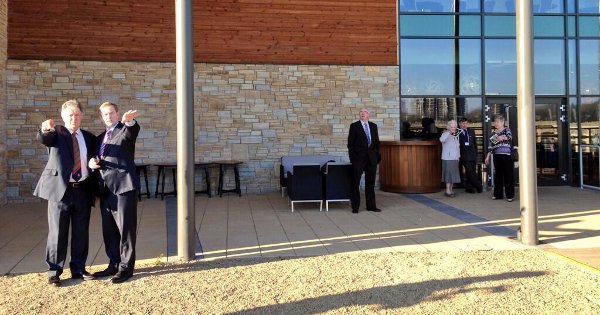 Enda Kenny in Manchester this afternoon. Photo: Embassy of Ireland

Earlier in the afternoon he also spent time at Manchester Town Hall, where the Manchester Irish Festival stalls will open this week.

While there the Taoiseach enjoyed a spot of Irish coffee – albeit without the whiskey - and a selfie with young festival volunteers.

He spent the afternoon chatting to Irish community members at the IWHC before heading for London.

He told The Irish Post: "It's great to have the Taoiseach here in Manchester recognising the work of the many Irish community who have this city their home over the years."

Councillor John Flanagan, Chair of the Manchester Irish Festival, added: "It's a great day for all Mancunians, particularly the Irish ones."