A PETITION has been launched to name a new Irish naval ship in honour of Irish explorer Tom Crean.

The petition has already gained 1,188 supporters of its 1,500 target, which means it will then be delivered to the Oireachtas in Ireland to be debated.

The Facebook group, Ireland Should Honour Tom Crean, is also growing rapidly with over 22,000 fans supporting the cause.

Until 2014, all Naval Service vessels were named with traditional Irish female names, taken from history and Celtic mythology.

At present the Irish Government has commissioned one new navel ship, which will be ready for service in 2018.

While launching the LÉ William Butler Yeats in Galway in October, Taoiseach Enda Kenny stated how he wished that in time, Ireland will have a naval vessel that is a fully functional hospital, able to respond to humanitarian and other emergencies across the world.

Both vessels are yet to be named and people are calling for at least one ship to be named after Kerryman Tom Crean. 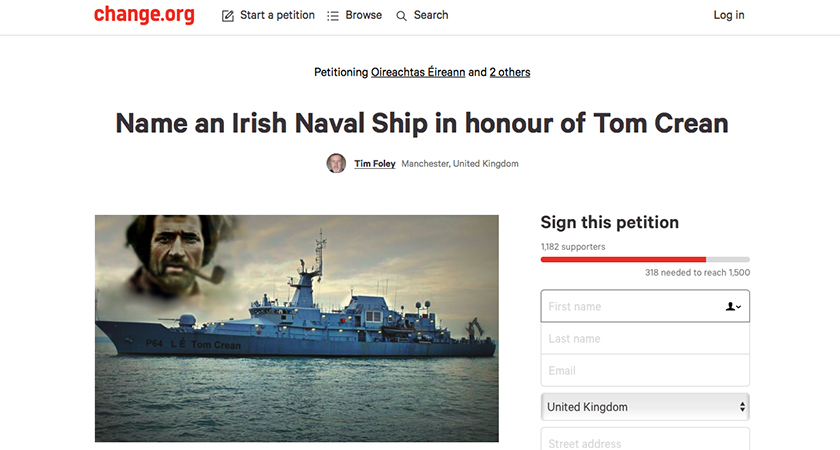 The petition is gaining supporters quickly

The intrepid explorer, exemplified humanitarianism and featured prominently in three major Antarctic expeditions a century ago.

Crean is also the holder of The Albert Medal for extreme bravery for trekking alone in search for help for his companion in arctic conditions for 18 hours.

He did this without a tent and with little to no food.

The Irish explorer lived an adventurous life and saved 28 lives on three separate occasions in the process.

Tim Foley, who only set up the petition four days ago, stated it has really captured the imagination and is growing at an astonishing rate.

You can support the campaign here.