KELLIE HARRINGTON was given a rapturous welcome as thousands of delirious locals lined the streets of the capital to catch a glimpse of Ireland's returning Olympic hero.

The Portland Row native was paraded through the streets on an open-top bus yesterday evening, proudly showing off her newly-acquired Gold medal.

The bus passed by Kellie's parents house, where scores of locals gathered to watch her beat Brazil's Beatriz Ferreira on Sunday morning, as the 31-year-old boxer wiped away tears, completely taken aback by occasion.

At one point, she was even tossed a Simba cub lion toy from the movie The Lion King - a nod to her catchphrase throughout Tokyo 2020: 'Hakuna Matata'. 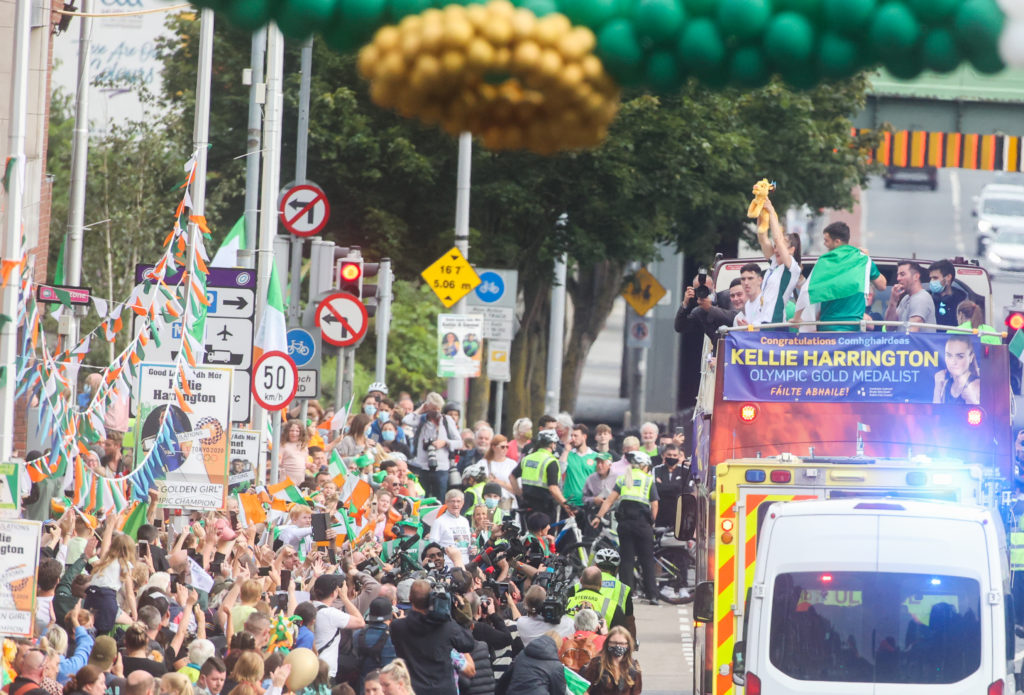 Dubliners hailed the homecoming as the "St Patrick's Day we never had," while Kellie's father Christy likened her return to "waiting for Santa Claus."

"They were actually tracking Kellie's plane home! So it's like Christmas Eve for us. It really is powerful," he said.

"It's unbelievable." Olympic boxers Kellie Harrington and Emmet Brennan are bowled over by the support on the streets of Dublin | Read more: https://t.co/SOtBakLRVe pic.twitter.com/TIAWGpy29o

Speaking to the press after touching down in Ireland on Tuesday afternoon, Kellie said she'd be "overwhelmed" by the reaction to her victory back home.

"For me to realise what's actually going on it will take me a couple of weeks - to not be around the team, to not be in that environment - to actually realise what has happened and what I have achieved.

"I haven't actually slept since the fight. I just had a couple of snoozes on the plane there, because my head is just about to explode."

Kellie has been hailed as Ireland's new sporting icon, as well as the jewel in the capital's crown, as talk of her being awarded the Freedom of the City intensifies.

Her Gold medal is just the 11th Ireland has ever won at the Olympics.