Titanic letter from hero Pastor who sacrificed his life to save others sells for £42,000

A LETTER penned more than a century ago by a Pastor who lost his life on board the HMS Titanic has sold for £42,000.

Baptist preacher John Harper famously sacrificed his life to save others, giving up his seat on the lifeboat alongside his sister and six-year-old daughter so he could offer words of comfort to others as the ill-fated ship sank in the Atlantic ocean in April 1912.

The widower, who was the pastor of London's Walworth Road Baptist Church, was on his way to Chicago when the ship hit the iceberg; he decided to stay and preach to those on board instead of fleeing the ship, and even gave his lifejacket to another passenger who miraculously survived the disaster.

According to the Henry Aldridge Auction House, who sold the historical item for £42,000, Pastor Harper preached the Gospel both on the sinking ship and then afterwards to those in the freezing water before succumbing to the inevitable. 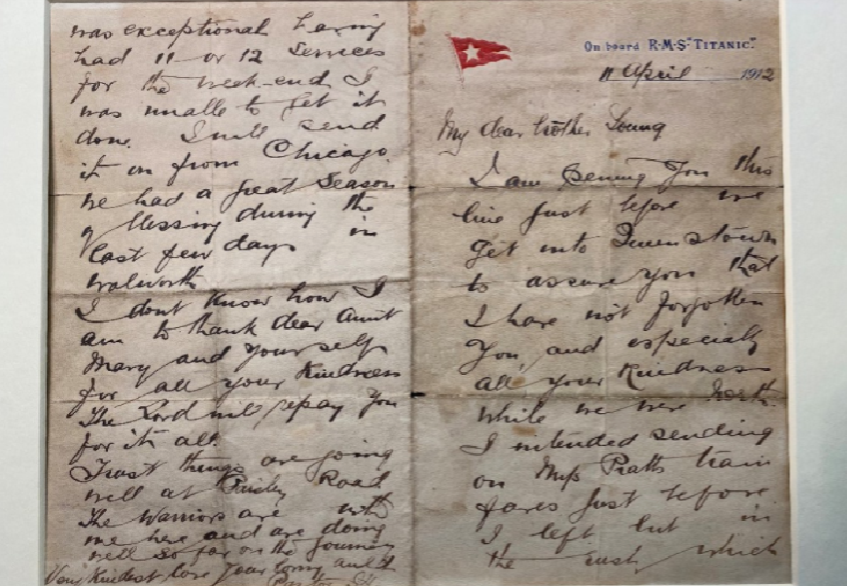 His daughter, Annie Jessie, went on to the the longest-living Scottish Titanic survivor, according to the BBC.

Described as "one of the true heroes" of the Titanic by the auction house, Pastor Harper penned a letter to a fellow clergyman just before the ship set sail from Cobh in County Cork-- known at the time as Queenstown, as Ireland was still under British rule.

I am penning you this line just before we get to Queenstown to assure you that I have not forgotten you and especially all your kindness while we were north.

I intended sending on Mrs Pratt's train fares just before I left but in the rush, which was exceptional having had 11 or 12 services for the week-end, I was unable to get it done.

I will send it on from Chicago. We had a great season of blessing during the last few days in Walworth.

I don't know how I am to thank dear Aunty Mary and yourself for all your kindness. The Lord will repay you for it all. Trust things are going well at Paisley Road. The warriors are with me here and are doing well so far on the journey.

You can find more Titanic memorobilia on the Henry Aldridge & Son website here.