Councillor Troy Gallagher is the newly elected Mayor of Islington

A LONDON council has welcomed its very first Irish-born mayor by flying the Irish flag high over the town hall.

On Thursday, May 20 Councillor Troy Gallagher became the first Irish-born Mayor of Islington.

The Donegal native, who has lived in Islington for more than 20 years, has chosen the theme for his mayoral year to be A New Tomorrow.

On the day the Irish flag flew high over Islington Town Hall as Cllr Gallagher took the oath of office at Islington’s annual mayor-making ceremony.

In his first speech as Mayor, Cllr Gallagher said: “If we are to seek a newer world, a newer tomorrow, let it be on the founding principles of respect, equality, and opportunity for all.

“And at the very heart of it let it be one of community.”

For his mayoral year Cllr Gallagher has chosen the charities ICAP, which supports people from the Irish community facing emotional issues, including depression anxiety and stress; forum+, which works to promote equality for LGBTQ+ people in Islington and Camden; and James Place, whose mission is to stop men dying by suicide. 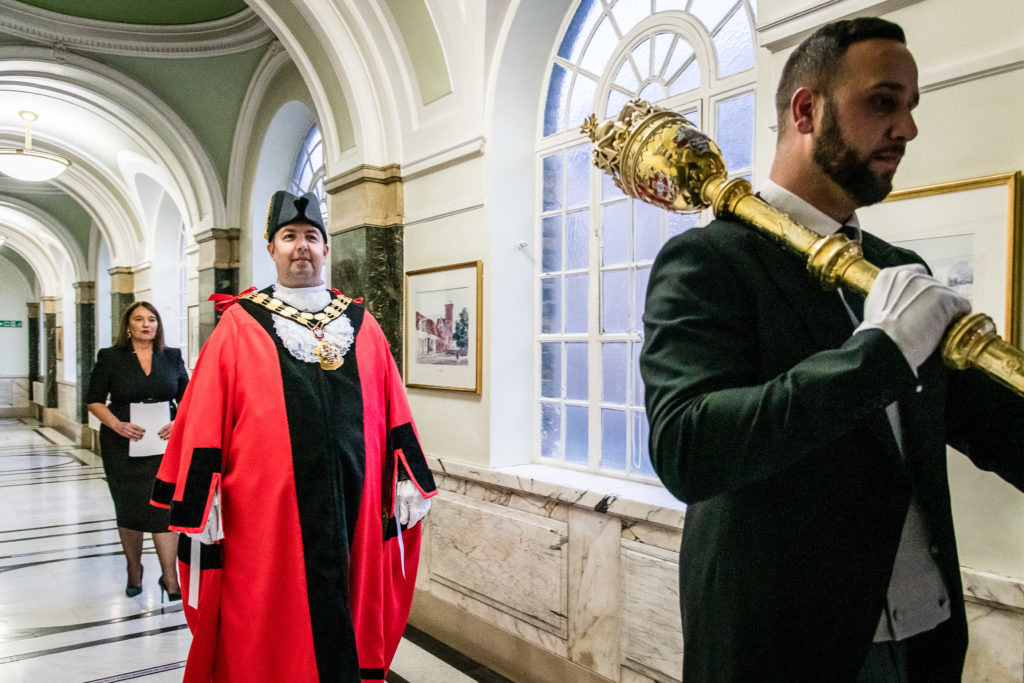 Cllr Troy Gallagher attended the mayor-making ceremony on May 20

Cllr Gallagher said of his new role: “There can be no greater honour in this borough than to be elected Mayor of Islington, and I also have a very deep sense of pride to be the first Mayor of Islington born in the Republic of Ireland.

“I enter this office with a sense of humility, compassion and empathy, but also with great confidence in our borough and the spirit and resilience of our people and community.”

He added: “It we are to build a new tomorrow, then we must talk of mental health, and tackle head-on the issue of suicide among young men.

“That is why I have chosen the brilliant charities ICAP, forum+ and James Place as my official mayoral charities.

“These excellent charities are at the very centre of this crisis and use their own lived experience to help prevent suicide and make that change.”

Cllr Gallagher added: “This Mayoralty will make it a priority to visit our neighbours lying alone in hospices and hospitals, and the support the participation of the most excluded in our society including the homeless and those marginalised.”

Mrs Mary Roberts will be the Mayor’s Consort.

Woman, 34, killed after being struck by van in hit-and-run in Donegal