What Donald Trump's presidency could mean for the Irish and Ireland?

WITH just over a week left before Donald Trump steps out in front of the world as the United States' 45th president a period of political uncertainity is looming ever closer.

But what could his administration mean for Irish people both at home and in the Untied States?

A warm reception from Enda Kenny...at least so far

As Ireland and the United States have shared a closely-linked history both countries usually see a warm relationship between their leaders and annual St. Patrick’s Day celebrations in the White House even take place.

This warm Irish-American relationship was clear to see between Enda Kenny and Barack Obama, and looks to be something the Taoiseach wants to continue.

After Trump’s success on election night, Kenny had a 10-minute phone call with President-elect Donald Trump to congratulate him on his new position and to discuss working together for the benefit of both countries.

Kenny even said that Trump was keen to visit Ireland during his time as President.

Trump’s last visit to Ireland was in 2014 where a red carpet was literally rolled out for him after landing at Shannon Airport - much to the bewilderment of many at the time. 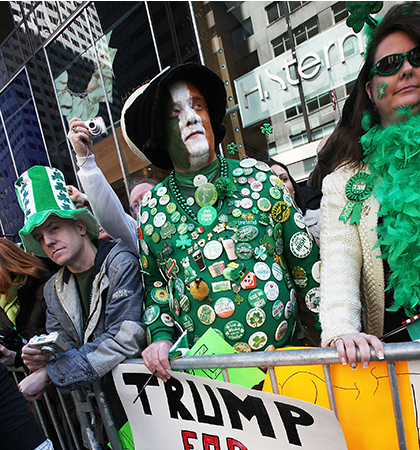 A Donald Trump for President supporter and other revelers look on during an annual St. Patrick's Day parade in New York City. (Picture: Mario Tama/Getty Images)

Despite Enda Kenny taking a warm approach to Trump, President Michael D. Higgins has voiced opposition to the politics of the United States President-elect.

In an interview with The Sunday Business Post President Higgins said that he fully agreed with a UN Human Rights chief who claimed Trump “played on popular prejudices and fears about migrants in order to win power.”

And the Irish President didn’t stop there. With his thoughts clearly looking at Ireland’s past experiences of emigration, the Irish president compared Trump’s anti-immigration politics to anti-Irish tensions seen in Britain following the Great Famine.

“One can easily imagine how a previously welcoming, warm environment could change as a tidal wave of arrivals replaced the previous streams, particularly when a sectarian demagoguery was available to whip up passions," he said.

"These seeds that are being sown are the ones that have disastrous consequences.”

“Ireland has a long and deep connection with the United States and its people, I have conveyed my best wishes to Donald Trump,” he said.

Similar to strong connections with the Republic of Ireland, recent US presidents have kept close ties to the political situation in Northern Ireland.

This was continued by Barack Obama who said during a short visit to Belfast in 2013: “If there’s one thing on which Democrats and Republicans in America can wholeheartedly agree, it’s that we strongly support a peaceful and prosperous Northern Ireland.”

This message has not yet been heard from Donald Trump who failed to mention Northern Ireland both during his campaign and time as president-elect.

Despite the lack of attention, Northern Ireland first minister Arlene Foster said Trump’s victory was historic and that “we are fortunate to have strong historical, economic and political ties with the United States.”

But economic benefits may be at risk for Northern Ireland if Trump’s election pledge to lure globalised American businesses back to the States is pushed through.

Speaking to the Irish News, chief executive of Manufacturing NI, Stephen Kelly said: “While we don’t expect companies to go, we do think that future investment plants will be subdued, delayed and put off altogether, at least while there is uncertainty around what Trump’s economic policies will be.”

With political turmoil in Northern Ireland threatening the Good Friday Agreement, which is viewed as one of ex-president Bill Clinton’s greatest successes, Donald Trump’s handling of the issue may become one of his first main task as President. 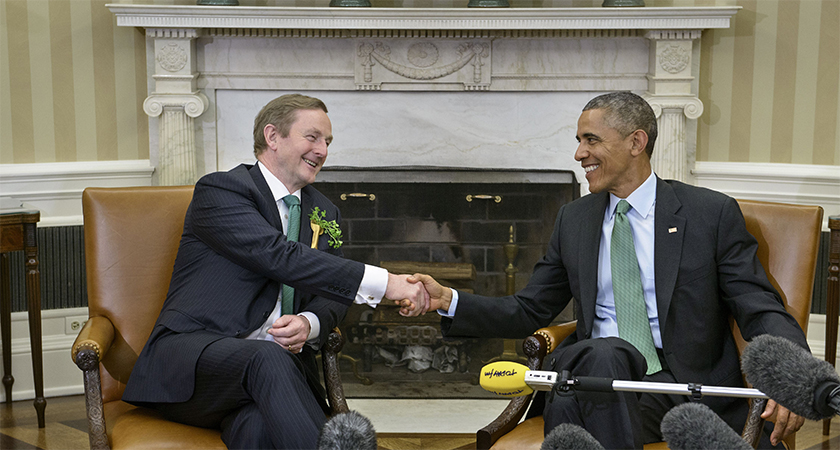 Enda Kenny enjoyed a good realtionship with Barack Obama but will this continue with Trump? (Picture: Brendan Smialowshi/AFP/Getty Images)

What about the Irish-American immigrants?

There are some concerns that Trump’s strong anti-immigration stance will see restrictions on visas popular in the Irish community in the US.

There are signs that Trump’s government will move towards scaling down a special type of high-skilled visa called H-1Bs, which allow holders to work in the States for three years.

According to Irish Central, these visas were claimed by 600 Irish people last year and are already under pressure from a bill by a prominent republican lawmaker who hopes to abolish their use.

The current Irish Ambassador to the United States Anne Anderson has also addressed concerns of current Irish expats who may not be in the country under legal documents.

Speaking to a panel in Washington Anderson said: “We know about the large numbers of undocumented Irish that have been living in the shadows.

"Many of them now are living in fear and that is a huge issue.”

In the months after Trump was elected, a common name circled around for the role has been Brain Burns, son of a senior advisor to former president John F Kennedy’s father Joe Kennedy.

In my minor ambassador obsession, Trump tells me he intends to make Brian Burns, son of Joe Kennedy adviser, the ambassador to Ireland

The businessman, who has been based in San Francisco for most of his career holds close connections to Ireland with his grandparents emigrating from Co. Kerry in the early 20th century.

Burns is known to be very proud of his ancestry and has remained active in Irish communities throughout the United States, which even led him to become the youngest ever American-Irish foundation director in 1963.

During his time as director Burns played a large role in the restoration of Marsh’s library in Dublin, the oldest library in Ireland.

According to Irish America magainze he is in possession of American’s largest collection of Irish art, which has been exhibited at Dublin’s Hugh Lane Gallery, Washington D.C’s Kennedy centre and Boston College.

He was also a main patron of the United States’ first Irish Famine memorial in Cambridge Massachusetts.

If appointed as Ambassador, Burns would have a big influence on any potential Presidential visit to Ireland. 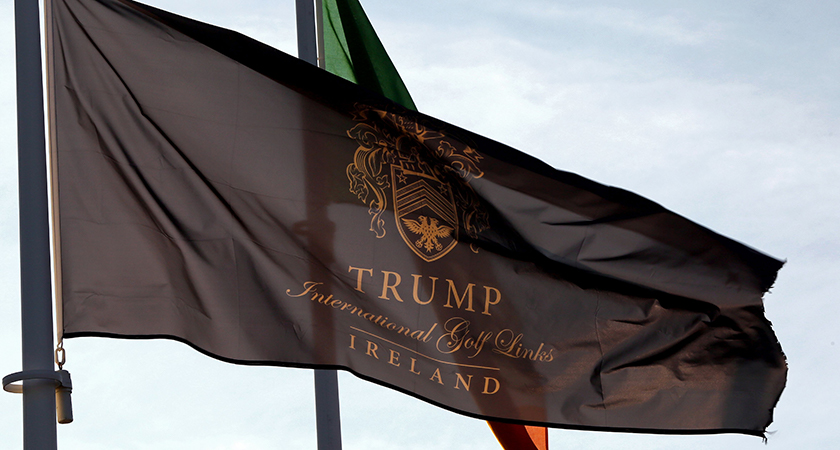 Enda Kenny's handshake fail with out-going President Barack Obama during the annual St. Patrick’s Day state visit in 2015 may be easily forgotten but the Taoiseach's past comments about Donald Trump may be less so.

While the traditional St.Patrick’s day celebrations between Ireland’s Prime Minister and the United States’ president will go ahead, Taoiseach Enda Kenny may need to prepare for an awkward meeting with Mr Trump following comments he made last year.

During last year's election, Kenny told Irish politicians in parliament that Trump was a “a dangerous man” while referring to his rhetoric of anti-immigration and isolationist politics.

As President-elect Trump has proven himself as a politician who doesn’t forget things lightly, Mr Kenny may be hoping that the spirit of St. Patrick’s Day will prevail when the pair meet.