THE URBAN DICTIONARY has come up with a fantastic new word for people who are refusing to adhere to public health advice amid the coronavirus crisis.

The term "covidiot" is now being coined for anyone stockpiling food or toilet rolls and for anyone who isn't following guidelines about social distancing.

The definition reads: "Someone who ignores the warnings regarding public health or safety.

"A person who hoards goods, denying them from their neighbours."

Examples of ways to use the word are also provided. 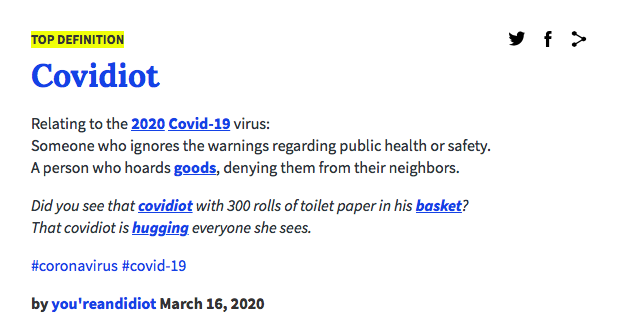 "Did you see that covidiot with 300 rolls of toilet paper in his basket?"

"That covidiot is hugging everyone she sees."

The entry was added last week and has already been voted up hundreds of times by users.

In recent weeks, the internet has been going crazy with photos and videos of people being 'socially irresponsible' amid the coronavirus outbreak.

Many have resorted to panic-buying and stockpiling of goods, prompting governments around the world to discourage any such behaviour.

Over the weekend across Ireland and the UK, people were pictured in parks, shops and beaches around the country, failing to adhere to social distances measures, again drawing criticism from government.

The term 'covidiot' is all too welcome, it seems.

The urban dictionary, for those living under a rock in the world of internet hilarity, is an online dictionary used for slang words and phrases.

While nothing on there is likely to feature in the official Oxford version, much of it holds a certain unofficial legitimacy. After all, we all know a covidiot or two don't we? It's like we've known that phrase all our lives.