A video has emerged of a toddler complaining about the fact his mum had left the house without giving him a kiss goodbye.

When kids don't get what they want, usually you expect tantrums or tears, but not here.

Instead we're treated to (what almost resembles) an extremely mature and passionate 'discussion' with the boy's father about how frustrated he is that his mother has left him hanging. 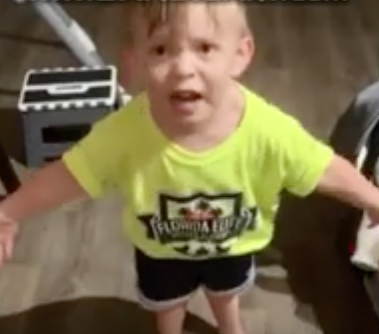 Scroll down for the video

In the video, which was shared on Facebook, the 2-year-old can been seen looking flabbergasted, and while the sweet thing can't quite string his words together properly, the message he's trying to get across is abundantly clear.

Gesticulating crossly, the boy looks for answers from his father, who charmingly translates everything for us, and appears to agree with his son that he's been let down.

"What kind of momma does that?"

At one point, the dissatisfied toddler points to his younger sibling next to him in a baby carrier, appearing to suggest that his mother hadn't kissed them either.