GOVERNMENTS in Ireland and Northern Ireland can no longer ignore calls to legislate on abortion, Irish campaigners in Britain have said.

Last week Taoiseach Leo Varadkar announced a referendum on Ireland's Eighth Amendment would be called in May or June next year. A date is yet to be set.

Although the Eighth Amendment is not law in Northern Ireland, the North is the only part of the UK where abortion is illegal, with women facing up to life in prison.

Last weekend a rally was held outside the Irish Embassy in London as thousands more took to the streets of Dublin to protest against Ireland's strict abortion laws in the first March for Choice rally since the Irish Government announced its timeframe for a referendum on the issue.

“We want to tell these women that we see them and we support them, and we want to show the Irish and Northern Irish Governments that they cannot ignore this any longer," said Maeve O’Reilly of the London-Irish Abortion Rights Campaign.

“Events like today show there is true momentum behind our campaign. We’re ready to fight for a full repeal of the Eighth Amendment and we will continue to push for legislative change in Northern Ireland.” 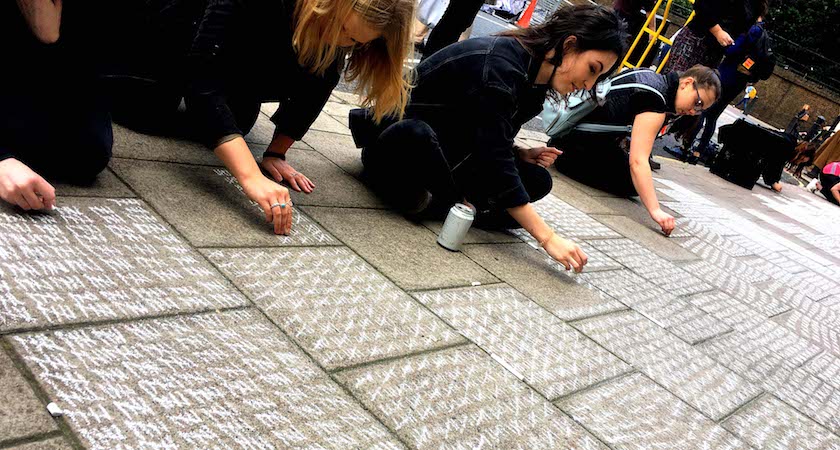 Over 200,000 chalk markings were etched on the pavement outside the Irish Embassy to represent the total number of women who left Northern Ireland and the Republic for abortions since 1983.

In London more than 200,000 chalk markings were etched on the pavement outside the Irish Embassy to represent the total number of women who left Northern Ireland and the Republic for abortions since 1983.

The display was part of the London March for Choice event, organised by the London-Irish Abortion Rights Campaign.

Ms O'Reilly said: “We chose to physically mark the pavement with 205,704 lines of chalk to make this huge number less abstract and make these often silent and secret journeys visible.

“With 11 people travelling across the Irish Sea every day to access abortions at British clinics, this number is quickly growing.” 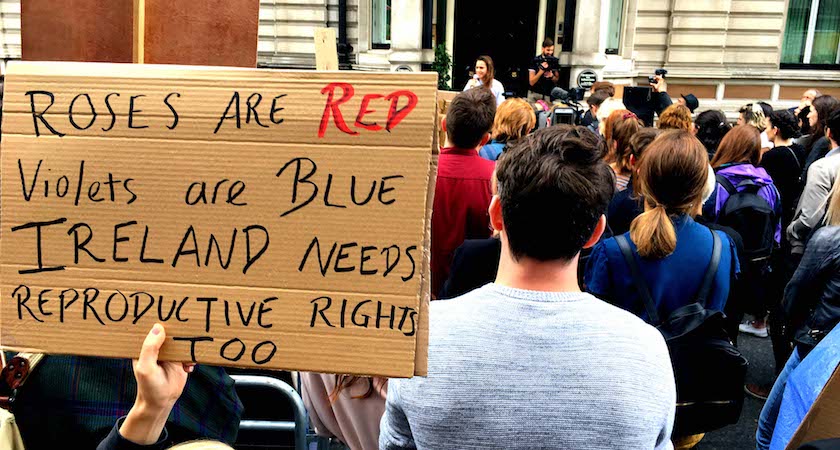 One of the signs at the London rally

The London-Irish Abortion Rights Campaign, which has 1,000 members, says it advocates on behalf of the 77 women a week who travel to England from Ireland, North and South, for abortions.

Under the Protection of Life During Pregnancy Act 2013 abortion is only permitted in Ireland if there is an imminent and substantial risk to a woman’s life, including suicide.

The 1967 Abortion Act was introduced in England, Wales and Scotland, but this act does not extend to Northern Ireland.

Pro Life campaigners, however, have said there is no real difference between a partial or full repeal of the 8th Amendment saying both options would strip unborn babies of all meaningful protections under the law.

"There is much speculation at present about whether any referendum proposal would be restrictive or allow abortion in wide-ranging circumstances," Dr Cullen said.

“In reality any form of repeal would deliver the same result – an abortion regime in Ireland, where it would become impossible to have any meaningful protections for unborn babies.

"The experience from other countries proves this over and over again," she added. “Talk of legalising abortion up to, say, 12 weeks is nothing more than plucking a time limit from thin air.

"And as soon as someone says the limit should be 12 weeks, someone else chimes in to say it should be 18 weeks, 22 weeks or even up to birth."